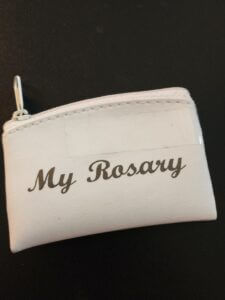 In the next couple of weeks, a very dear friend of mine and her husband who live here in Florida are moving to Indiana. (Yes, they know how cold the winters will be!) They are moving for what I think are sensible reasons—anticipating aging, health difficulties, and wanting to be with one of their sons and his family.

And I will miss her so very much.

We met when Eileen responded to a notice I put out for people to join a meditation group I was forming. The moment we met, we clicked. She was not a regular participant, but came often enough for us to get to know each other. Although superficially we didn’t have a lot in common (although we were Conservatives, which is a very big deal), we shared many values about life, relationships, and marriage.

But I think the deepest way in which we connected was through our faiths. Eileen is Catholic, and I am Jewish, so in terms of theology we had many differences. But from the beginning, we showed sincere respect for all those things we shared, including our belief in G-d. It was clear to both of us that we were both grounded in our faiths, that we practiced them with devotion and an intimacy grew between us in that realization.

We periodically have breakfast together, and recently the topic of religion came up. (Ordinarily, we didn’t discuss religion much, since there were so many current events and life challenges to share.) But when religion came up, Eileen said she’d love to know my take on Jesus, particularly the questions about the Messiah. I said that I would also like to know from her about the rosary, how it’s used and what it means to her. We settled on talking about the rosary at our next breakfast.

That opportunity was this past week. Eileen told me about her own practice, the story behind her rosary beads and others she has owned, the ways to pray with the rosary, and the intention of the prayers (although we didn’t cover them in detail). I have always been interested in the ways that religious rituals are practiced, particularly as they relate to G-d. Eileen’s explanation was so sincere and heartfelt, sharing the questions she poses to herself during her practice and how she makes her practice alive and meaningful, that I was very moved. It was a lovely sharing.

In anticipation of our breakfast, I also suddenly remembered that I had acquired the rosary of my husband’s Aunt Esther, who passed away several years ago in Kentucky. I loved her dearly; she was a spunky, outspoken woman who didn’t suffer fools. Her Catholic faith was sound and deep, and although she stopped going to church (and I’m not sure about the reasons for her decision), she would “attend” church on television. When I last saw her, she was in a hospital hospice section, unable to speak due to a stroke, but she was conscious and could hear and see me. I took her hand and she grasped mine with all her might. It was a powerful gift for me; I knew I probably wouldn’t see her again. But I felt G-d’s presence between us, and that alone was sweet. When she passed, no one else was interested in her rosary beads, but I couldn’t bear to let them go homeless or to a stranger. So, everyone was willing to let me take them. This is a photo of them— 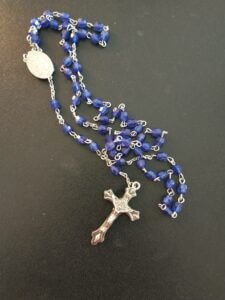 I have always been a student of relationships, trying to understand what makes them special, other times what makes them so trying. I began to think about my relationships with others and the part that religion plays. I feel that I tend to have a special connection to people who are people of faith, a shared “spiritual chemistry.” We all seem to practice in a way that demonstrates our dedication and love of G-d: the deeper the connection, the closer our connection. It doesn’t even necessarily matter if they are Jewish or not; it is, I believe, the shared belief in G-d that joins us. They live their faith, demonstrating that faith is integral to their lives. I try to do the same. Many times on Ricochet we have had discussions of faith, and I am always touched to recognize how much we have in common.

These observations are not meant to suggest that I don’t have meaningful, loving relationships with people who do not practice religion; to the contrary, I am lucky to have several, including my husband. Nor do I check people’s spiritual credentials before I befriend them. But I find it fascinating that G-d seems to play a role in some way as we grow to know each other.

So, I’m wondering: Do your deepest relationships tend to be with people of faith? Do you discuss the differences or similarities of your beliefs or theology? Or do you simply allow your faith to be the catalyst to a loving and caring relationship?

My thanks to dear Eileen for her friendship and love. I will miss her.