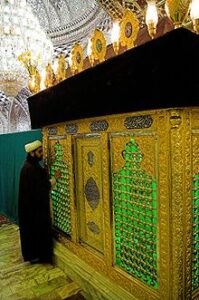 Joe Biden’s obstinate decision to continue to re-negotiate the Iran deal reminds me of the famous quotation often attributed to Einstein, “Insanity is doing the same thing over and over and expecting a different result.” These efforts are not only true for Biden and his administration, but for the entire Progressive Movement. They never learn anything from their failures and when they fail, they blame others or insist they just need more money or more time.

This time the danger that’s developing is not just about Iran in isolation, but the entire Middle East, and therefore, the security and safety of the world:

In a message directed at the Biden administration and the other Western powers involved in the Vienna negotiations, the Arab countries said that Iran and its terrorist militias are continuing to create chaos and instability, especially in Syria, Iraq, Yemen and Lebanon.

The Arabs, including the Arab League, are telling the Biden administration that, in their view, it is not only Iran that threatens their security, but also its terrorist proxies, including Hamas, Palestinian Islamic Jihad, Hezbollah, and the Houthis.

The Arab countries that protested the potential of enabling Iran to develop their own nuclear weapons were Saudi Arabia, United Arab Emirates (UAE), Bahrain, and Egypt.

Not only is there a danger of Iran providing nuclear weapons to its proxies, but the Saudis have threatened to acquire nuclear weapons once Iran develops its own. It is well known that Iran is a major supplier to terrorist organizations in the region:

They condemned Iran’s interference in the Syrian civil war and affirmed their solidarity with Morocco in confronting the interference of the Iranian regime and Hezbollah in the kingdom’s internal affairs, especially in regard to arming and training the separatist elements that threaten territorial integrity, security and stability.

Most recently the leaders of Saudi Arabia and the UAE are not taking calls from the President. And of course, the Abraham Accords, which were building new relationships with Israel and the Arab countries, are now at risk without U.S. support.

So let me see if I have this right. The U.S. is negotiating with the most powerful terrorist organization in the Middle East, so that that country will have the advantage in taking over the control of the region, discouraging other Arab countries from working together, and threatening the internal securities of those countries.

And then, of course, Israel is caught in the middle of this situation.

The Biden administration thinks this is the path to removing the need for our involvement in the Middle East; Iran can simply take the reins and the world will go on.

The lack of insight and understanding of the current administration is mind-boggling. They must think that once they make friends with Iran, the country will drop its plan to expand its international caliphate.

And all of us, the entire world, will pay the price.