How much “ink” has been spent on the pages of Ricochet attempting to diagnose this current leftist scourge that is being wrought on the world? Mass delusional psychosis. Indulgent intellectual laziness. Cancel culture. And then some. It is quite a list. We toss about these root causes and many a terrific piece on Ricochet has offered up such insights. Andrew Breitbart nailed it that “Politics is downstream from culture” and the Left owns culture today. A quick search of Ricochet articles with that phrase shows a plethora of great observations. Likewise, the references to Alinsky, Marcuse (Frankfort School of Critical Theory), and Soros are accurate and not in short supply.

It’s apparent the most concerted efforts are focused on the greatest bulwark standing against such Leftist crusades: the constitutional republic that is the United States of America. Is this current evolution of leftist claptrap more deadly than that of, say, Hitler, Mao, Stalin, Castro, Lenin, Pol Pot, Kim, Idi Amin, Pinochet, et al? My G-d, the list is simply heartbreaking and far too long. It is stupendously asinine that a cogent human being can think socialism results in anything other than destruction, evil, and death. Much less produce human flourishing. Alas, here we are. I challenge any non-drooling person to find a country on this list that is preferable to the USA. I’ll wait.

This contemporary brand of leftism seems especially productive though to this cause: breaking apart the once-in-a-universe social contract the Founding Fathers constructed nearly 250 years ago. So what differs from those previously mentioned murderous regimes? Regimes that in many instances Americans found so reprehensible, that cumulatively, millions chose the self-sacrifice to go abroad in defense of humanity and freedom. The difference simply put: is no longer abroad. Lincoln’s oft used and prescient quote has come home to roost: 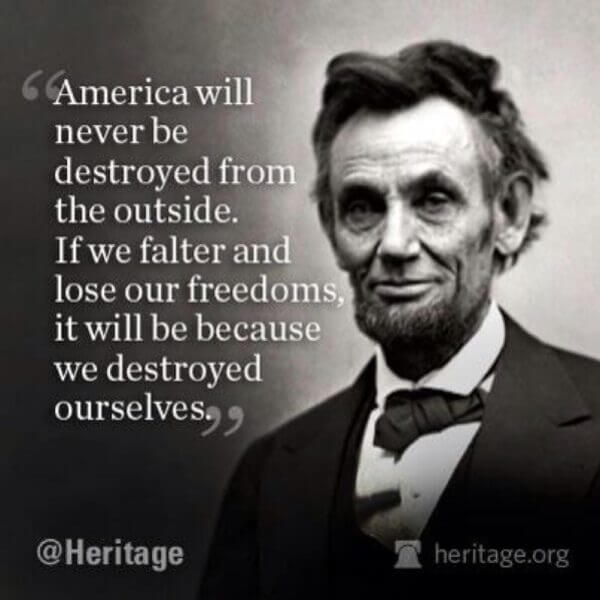 But these ideologies require a vehicle to invade the inner workings and institutions of America. Without apologies, I would stipulate the Democratic Party is that vehicle. At this point, most Ricochetti would say, ‘No [expletive], Sherlock.  Tell me something I don’t know! We’ve been writing and harping on the Dims for the better part of three decades.’ Fair enough.  But I ask – ‘so what are we doing about it?’ Conservatives have regularly been passive participants in this assault. Occasionally active participants, as Bush’s immigration policies and budgets can attest.

A quick assessment of major conservative ‘action’, post-Reagan, brings to my mind: Newt’s “Contract with America”; Bush’s war on terror; the Tea Party; and Trump’s election and policies. I’d say conservatives are 1-2-1. Newt was a win; Bush and the Tea Party eventual losses; and Trump a tie. (I see Trump’s legacy as the classic tragic hero: where his greatest strengths toward policy were also his eventual downfall when applied to personality). Feel free to offer up other conservative failures or successes, but by my count, the former far outweigh the latter.

Conservatives, when given power, have for too long confused inaction with conserving. Progressivism always progresses; the verb not the noun. Conservatives largely lean toward avoidance to govern when given the people’s voice. So I must say with great enthusiasm that recent actions and trends in Florida (Team DeSantis and Scott) and Virginia (Team Younkin/Sears/Miyares and involved parents) bring glimmers of hope and examples of how conservatives can actively lead and govern out of this leftist onslaught. Is there risk? Yes. Is it worth it? A thousand times, yes!

And it is a conservative strength we often fail to recognize. Conservatives live and respond to the real world. Our elected conservatives should do the same. Put another way, we frequently fail to bring up, much less hold Leftists accountable, for their delusions. Leftists attempt to live in a fantasy world. Theirs is the ultimate escapism from reality and it’s only in the comfort, benefits, and affluence of a system they despise that it’s possible. It wouldn’t be a problem except that Democrats, buoyed by left-thinking corporations, universities, and media that would make Goebbels giddy, have influence and power.

Watching our pedestrian Veep makes it clear — Democrats have embraced performance art as a lifestyle. Style over substance; image is everything. It started with her selection — even the Democrats didn’t want her as the primaries proved. But she ‘looked’ the part. Why else would you continue to trot out the embarrassment that is Kamala Harris to these global hotspots? Prepping a resume for the future President Harris – now that sends shivers down the spine. The border, Munich, Poland are all abject failures, but no matter. In the Democrats’ script, she is now “experienced.” Performance art. 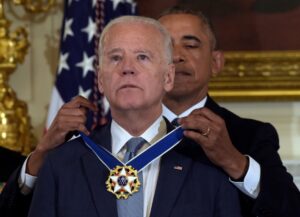 Our pretend President has always been in love with the idea of being President, but not actually being President. For the better part of 30 years, he only played the part of Senator, never really “Senatoring”. On his way out of office, Obama presented this lifelong fraud the Presidential Medal of Freedom, thus conferring unearned gravitas. Performance art.

Defund the police reduces crime. 1619 project. BLM assists blacks.  ANTIFA is not fascist. Trump/Russia collusion, FISA, and IRS deceptions. Build back better won’t cost a dime. Afghanistan withdrawal was a success. On and on and on. Performance art.

The Emperor will continue to have no clothes only if there is a receptive audience. The performance art can only end when enough see through the charade. Leftists promise happiness but they are thoroughly an unhappy group. But what will convince them? That is where conservatives must offer real solutions for a real world; serious people for a serious time. Can we make it happen? DeSantis and Youngkin seem to think so.