I’m not far enough into my next Peter Schweizer book for a really detailed post but I did want to pass on this paragraph from his 2015 offering Clinton Cash: The Untold Story of How and Why Foreign Governments and Businesses Helped Make Bill and Hillary Rich:

Clinton and Putin had a close relationship. President Boris Yeltsin first appointed Putin prime minister in 1999, while Bill was still president, and they had remained in contact ever since. In January 2009, while at the World Economic Forum in Davos, Bill had gone to Putin’s private party at the Sheraton, where he was greeted by the Russian leader as “our good friend” before cheering him with vodka shots. The pair then headed off to a private room where they “talked deep into the night.” In September 2013, as the Ukrainian crisis built, Clinton offered what the Russian news agency RIA Novosti called “Rare U.S. Praise for Putin” on CNN. Clinton described the Russian leader as “very smart” and “brutally blunt.” When he was asked by CNN’s Piers Morgan if Putin ever reneged on a deal, Clinton responded: “He did not, He kept his word on all the deals we made.” – Page 53

There is much in there…such as not “my good friend” but “our good friend.” Bill seems to have been quite chummy in Putin’s social, business, and/or political circles. Interesting. And how Bill thinks Putin is “very” smart…a noticeable step above what Trump seems willing to allow. But I want to focus on Bill’s phrasing of “all the deals we made.” I presume there were not a lot of deals done between the two men in the 1999-2000 timeframe worth referencing a decade later so…what deals were you referring to Bubba? Were they all reported properly? (Now I’m getting ahead of myself, better save some of that for this weekend.)

Anyway, I found that interesting after reading this earlier today:

I wasn’t so much interested in the topic at the time but it struck me just how easy it is for fake journalists to go from reliably incurious to pleadingly focused. That would normally put a lot of strain on a properly wired mind. Kinda telling. (Don’t worry, based on my reading so far, that crooked little name will come up again quite often in my future posts.)

Also from today, given how much is out there (and ignored by those reliably incurious twits in the media) about just how chummy Team Clinton was with Putin and his associates in the half-decade or so leading up to “The Dossier,” maybe those players would prefer to keep their pie-holes shut during this particular point in history.

But, then again, maybe not: 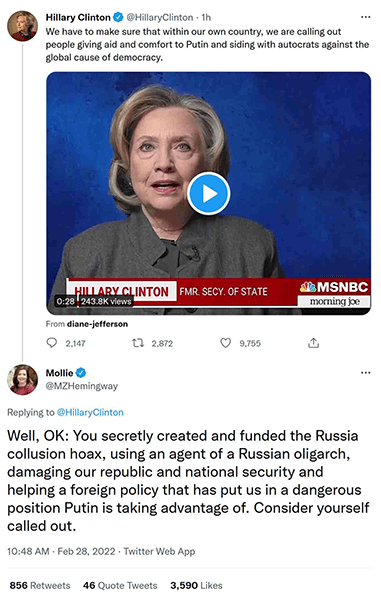