I’m not writing for style points, and I’m pretty sure I’m disqualified anyway because of the steroids, but I want to lay out my experience traveling to the US from Korea and coming back to Korea yesterday.

I left Korea for Oklahoma City on December 31. At the airport in Incheon, I took the required antigen test to enter the United States. It cost about $77. Because of this test and the time it took to get results, I had to be in the airport more than 10 hours before my flight. Also, I was refused service at a coffee shop, café, and convenience store because I didn’t have a negative test result, despite the fact that it is not a requirement in everyday Korean life. During my day in the airport waiting, I noticed the janitorial crew in hazmat suits and plastic visors emptying trash cans at 30-minute intervals and spraying them with disinfectant. (I always have loved performance art.) From that point on, there was no check of my health, though the airport was festooned (always wanted to use that word) with signs boasting, and promising, three temperature scans before boarding.

I knew I had arrived in The States, Atlanta, when a big black transvestite handed me my coffee. On to Oklahoma City.

In Oklahoma, a few people were wearing masks, but they were in the minority. It was a relief. I had to go a long way west to Las Vegas to pick up a friend and boomerang back to Oklahoma City, and we noticed it was much the same everywhere else. Masks, by and large, had fallen out of fashion. The exceptions were some Indian reservations in Arizona and New Mexico, with strict rules for mask-wearing and signs telling people not to meet their friends or even go outside. I thought that was pretty crazy until I returned to Korea three weeks later, which was yesterday. (By the way, at the Indian schools we passed — Indian mascots. Sometimes cartoony ones. Take that, Washington Ball Club.)

A PCR test taken within 48 hours of boarding a flight is required to enter Korea now. (Cost for me was $150.) The rules and requirements change quite regularly here. After a big dispute over my binder full of medical documents, and the real possibility I would be denied entry, I was allowed to enter under the standard ten-day quarantine. I was not permitted to go buy food or make any other stops, and foreigners are not allowed to use public transportation. Luckily, I had a friend who drove me an hour and 40 minutes to my house, otherwise, I would have had to hire a taxi. Imagine the fare. Unfair.

Another North Korean-style requirement of the quarantine is that you must download an app on your phone so the government can track you. And, you are required to take another PCR test within 24 hours of landing. However, going out of your house to get this test violates your quarantine, and you will receive a message that you have broken quarantine. This technically could put you in jail for a year, and as of yet, nobody has explained how to go get a test without leaving their house. (Even walking in your yard or going into your garage violates quarantine.) I did it anyway. I asked if my second PCR test was negative, would that mean my quarantine was over? The answer? No.

Guess what? It is also a violation of quarantine to throw trash outside because that would mean a person has stepped outside of their home.

Because of the app, you have to submit a self-health check every day, and your case officer, your jailer, can call at any time and you are supposed to be there to pick up the phone. I have received six messages today and three phone calls. Thinking of taking out a restraining order.

Kindly, the warden allowed them to bring me an Academy Awards-style goodie bag, most of which is useless since I can’t go outside anyway. What use do I have for masks? However, I do think the biohazard trash bag is pretty cool. 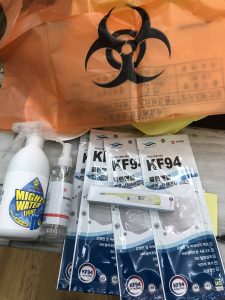 I’m lucky that I had food in my place from three weeks ago when I left. I’m not sure what the procedure is for people who don’t have food or don’t know enough Korean to order it (though they wouldn’t be allowed to go outside and get it anyway), but I’m sure their kindhearted warden provides them with a lot of instant noodles.

I’m very lucky that I have a lot of Korean friends. It would be very hard for someone who doesn’t. Seriously thinking about forming a K-Pop group, The Quaranteens.

Thanks for reading this far. Your endurance is legendary.