Much of the time, the United States Supreme Court deals with exotic and arcane constitutional issues beyond the ken of the average person on the street. The justices are versed in matters of constitutional jurisprudence and much of the writing and dialog surrounding judicial rulings carries a hint of impenetrability for the uninitiated. The complexity of the jargon, and the endless minutia of constitutional law, hovers over the court and serves the interests of the justices because such things cast a patina of otherworldly competence on the court’s utterances and rulings.

Many on the right have understandably been laughing this week at the ill-informed comments made by Justice Sotomayor regarding Covid, because they revealed just how little she knows. The whole episode has a similar feel to that moment in the Wizard of Oz when Toto pulls back the curtain to reveal that the wizard is really just a con man and huckster. I find myself wondering if this event isn’t a much bigger deal than it seemed at first blush. Institutions that want to maintain their credibility must, at all costs, retain the perception of superior competence. Besides hilarity, what Justice Sotomayor revealed, for all the world to see, was the essential uninformed incompetence of those who would deign to tell the rest of us what to do.

By opening her mouth, Sotomayor has thrust one more dagger into the heart of elite mystique. Who can blame the many thoughtful observers for concluding that the overwhelming stench of self-superiority emanating from the government class is actually an artifact of the Dunning-Kruger effect?  Maybe it really is stupid people who think so highly of themselves that they are eager to boss other people around.

In the early centuries A.D., more than a little conflict raged throughout the Roman world. A great deal of it was fomented by various emperors who, to greater or lesser degrees, mandated the persecution, first of Christians and later of pagans, as Christianity rose to prominence throughout the empire. In some ways, the upheaval was an artifact of the convulsive process of overthrowing centuries of pagan thought regarding the power and authority of idols in the lives of human beings. 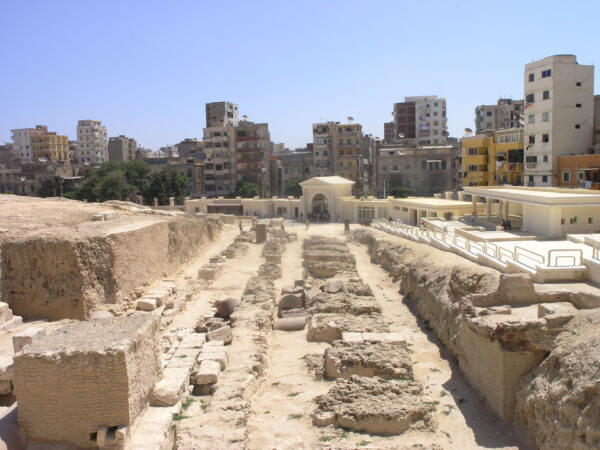 Remains of the Serapeum, Alexandria.

A temple to the gods Isis and Serapis existed during this time. It was called the Serapeum and inside stood an idol so large that its arms extended on either side to touch the walls of the temple. People had been taught that should anyone harm the statue/god,  the result would be that the world would instantly disintegrate, returning to its original state of chaos.

At the height of the conflict leading up to the destruction of the temple, a particularly bold young man climbed up on a ladder and took a swipe at the idol’s face with an axe. Gibbon recounts this story in his massive Decline and Fall of the Roman Empire:

“It was believed that if any impious hand should dare to violate the majesty of the god, the heavens and the earth would instantly return to their original chaos.”

It was no small thing to strike such a blow since no one really quite knew what was going to happen afterward. Notwithstanding the concern of the crowd in the temple, the young man “aimed a vigorous stroke against the cheek of Serapis which fell to the ground; the thunder was still silent, and both the heavens and the earth continued to preserve the accustomed order and tranquility”.

And in an outcome that could NOT have been made any more appropriately symbolic had someone tried, no sooner was the idol destroyed than thousands of rats began pouring out from where they had gnawed away at the idol’s rotten interior. Tunnels and secret passageways were later discovered which the temple priests had used to maintain illusions regarding the power of the idol. And apparently, the rat infestation convinced even some of the most ardent pagans to officially change sides.

The loss of mystique has a rather transforming effect on one’s thinking. And in the case of all the people in the Serapeum that day, the loss of the idol’s mystique led them to bring down the status quo and to do so even in the absence of knowing what lay beyond.

That story has been lurking around the edges of my thoughts as I’ve read all the mockery of Sotomayor.

Right after Marco Rubio was elected to the U.S. Senate, he spoke of the awe he first felt as he experienced the grandeur and perks of being in that august body. But he also revealed that the people who look good as a scripted campaigner don’t necessarily impress when experienced in their natural state.  Rubio said that when he first got to Washington, he would go to the Senate dining room and the wonder of it all made him ask “How did I get here?” But after a few weeks on Capitol Hill and having had the opportunity to get to know some of the other Senators, he began asking himself “How did they get here?”

The drip, drip, drip of these revelations of incompetence are unlikely to end happily for the elite. I’m not complaining about that. Like many of those in the Serapeum that day, I harbor the suspicion that, though I’m not sure what will happen next, the core of our institutions is so rat infested that the unknown might be better than the way things presently are.

The vaccine mandate hearings turned out to be a significant blow to the mystique of the Supreme Court. Truth be told, most of us don’t hold up too well on close inspection. But that is not entirely unexpected. It also isn’t the end of our worlds, because we do not justify our existence on the basis of a cultivated myth suggesting our superior competence. Also importantly, we do not seek to tell our fellow citizens what to do. But scores of politicians, bureaucrats, and judges, many with underwhelming intellects (it turns out) and no real-life experience to speak of, have colluded with the media to sell the voters a fraudulent account of their own supposed exceptional abilities. They’re all hat and no cattle, as the Texas saying goes.

For a long time, the establishment was able to skate by in their mediocrity because the challenges faced by flyover country did not meet the level of alarm sufficient for those voters to pay very close attention to the establishment’s pose of superior competence.

There is a growing suspicion that the American scientific bureaucracy was up to its elbows funding and encouraging gain of function research in China. If so, the pandemic may have actually been unleashed on the world by the hubris and incompetence of the technocrats in government. If it becomes apparent that the American health bureaucracy was involved in causing the pandemic, even indirectly, the damage to the illusion of technocratic competence will be immense. It could easily amount to the final axe blow to the cheek of the American Serapis that brings the entire rotten, technocratic edifice crashing down.

And it will be interesting to see what comes after that.