Instead of jumping in the shower when I wake up, I have a bad habit of grabbing my phone and checking social media. It’s a great way to start off the day on the wrong foot. Here’s the first tweet that popped up Thursday morning. 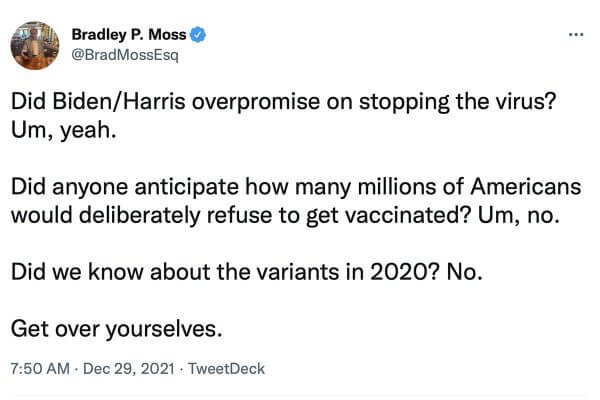 Bradley P. Moss … sorry … Bradley P. Moss, ESQUIRE, is a DC lawyer and prolific tweeter. According to his bio, he earned a J.D. from American University’s Washington College of Law, and an International Affairs B.A. from George Washington University. Despite the top-notch education, he doesn’t seem to have learned much.

He begins his deep thought as follows:

Did Biden/Harris overpromise on stopping the virus? Um, yeah.

Of course they overpromised, as anyone with a cursory knowledge of Joe Biden, Kamala Harris, the federal bureaucracy, and basic virology knew when Joe said, “I’m going to shut down the virus, not the country.”

As of December 14, Biden has more COVID deaths on his watch than Trump did, and this after the previous administration gifted him three mRNA vaccines. Yes, this is the same “Trump vaccine” Kamala said she wouldn’t take.

Yes, everyone knew that viruses mutate, at least everyone but Mr. Mossquire. This is why doctors reformulate the influenza shot every year.

His second point is what really drew my ire:

Did anyone anticipate how many millions of Americans would deliberately refuse to get vaccinated? Um, no.

Um, yes, it was obvious that millions of Americans would refuse to get vaccinated. Just look at Kamala’s 2020 refusal above. Aside from the progressive condemnation of the “Trump vaccine,” simply look to human nature.

If any leader says, “you should do X,” lots of people won’t. Some folks are busy, others disorganized, some don’t care, others never get around to it. Then you have a subset that opposes X, whatever it might be. There are also those who oppose X for no reason at all. I call this the “Wet Paint Effect.” Walk down a hallway and no one touches the wall. Tape a “Wet Paint” sign to it and it will be covered with fingerprints. Including mine.

The incompetent leader then says, “you have to do X.” Here’s where human nature really kicks in. Many folks, especially Americans, instinctively distrust the government. For the past several decades, our “experts” have gotten damn near everything wrong, from the Iraq War to the housing bubble to bailouts to Obamacare to Russiagate to Afghanistan. The list is endless. A politician asserting “but this time we’ll get it right” without even acknowledging his disastrous track record will be laughed off the stage.

Ultimately, humans will refuse to do the “right” thing because “men are not piano keys.” If you don’t understand human nature by mere observation, just read any classic book. One of the best is Fyodor Dostoyevsky’s Notes from Underground.

[Y]ou tell me again that an enlightened and developed man, such, in short, as the future man will be, cannot consciously desire anything disadvantageous to himself, that that can be proved mathematically. I thoroughly agree, it can–by mathematics. But I repeat for the hundredth time, there is one case, one only, when man may consciously, purposely, desire what is injurious to himself, what is stupid, very stupid–simply in order to have the right to desire for himself even what is very stupid and not to be bound by an obligation to desire only what is sensible….

Now I ask you: what can be expected of man since he is a being endowed with strange qualities? Shower upon him every earthly blessing, drown him in a sea of happiness, so that nothing but bubbles of bliss can be seen on the surface; give him economic prosperity, such that he should have nothing else to do but sleep, eat cakes and busy himself with the continuation of his species, and even then out of sheer ingratitude, sheer spite, man would play you some nasty trick. He would even risk his cakes and would deliberately desire the most fatal rubbish, the most uneconomical absurdity, simply to introduce into all this positive good sense his fatal fantastic element.

It is just his fantastic dreams, his vulgar folly that he will desire to retain, simply in order to prove to himself–as though that were so necessary– that men still are men and not the keys of a piano, which the laws of nature threaten to control so completely that soon one will be able to desire nothing but by the calendar….

I believe in it, I answer for it, for the whole work of man really seems to consist in nothing but proving to himself every minute that he is a man and not a piano-key!

The “Underground Man” focuses on negative behaviors, but it equally applies to behaviors considered noble. Many, many humans innately reject being forced into a role as cog in society’s machine; a “piano-key,” if you will. They will act out their individuality, sometimes for good ends and other times just because.

Humans possess reason, but they are hardly rational animals. This is why I never identified as a pure libertarian. Utopian free-marketeers insist that if people are just left alone, they will make the best rational choice for themselves. Have they met people?

About 14 percent of Americans smoke cigarettes, despite knowing the health risks. I knew motorcycles were more dangerous than cars; guess what my first vehicle was? And try lecturing an addict about rational choices.

Even if the Covid vaccines were thoroughly tested (they weren’t) and 100 percent effective (they aren’t) a lot of people would refuse them. Even if lockdowns and masks were proven to stop the virus (they don’t), Americans wouldn’t obey.

Some of the reasons behind this are sound. I’m more interested in living than existing and have gone about my life as normal since May 2020. I’m not much at risk of serious problems with Covid anyway, so my risk assessment is different from an obese, immunocompromised 80-year-old. Even then, I would probably still act the same since death is always near while life is fleeting. No one gets out of here alive; enjoy it while you can.

Other people refuse just because. They don’t have “bad” reasons; they aren’t reasons at all. Human nature continually asserts itself over rationality, however “rationality” is defined this week.

I’ve argued against Covid mandates since March of last year because they are counterproductive. Just issuing a mandate creates resistance where none was before. Especially when the politician issuing it has repeatedly proved incompetent or malevolent.

You can program a device to obey your instructions. But men are not piano keys. If Mr. Esquire ever read a book, he would have known this from the jump.