A month ago I was walking on the Princeton campus and saw this sign in front of a church. 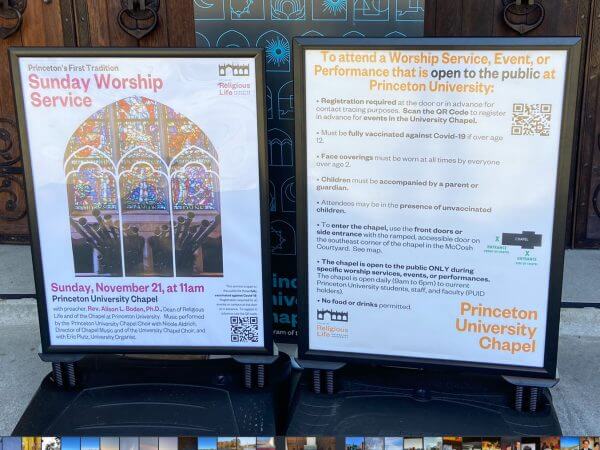 I realize that this is a campus church but the requirement that people attending a service must be vaccinated is an abomination. Princeton like most colleges these days has an administration full of dolts and morons (my apologies to dolts and morons for the comparison). COVID vaccination at most provides some reduction in severity for a few months; the protection is much less than what one gets from natural immunity. The young people attending Princeton are at greater risk from seasonal flu than from COVID but I’m sure the chapel doesn’t typically close down during flu season. If Princeton is this scared by COVID perhaps they could test people for their BMI since obesity is a major risk factor. Their slogan might be no Vitamin C, no church service since low Vitamin C levels are another major risk factor. Academia today is driven by fear rather than logic and facts so perhaps this sign is a rare case of truth in advertising.

Getting vaccinated if you’re not at risk from COVID is unChristian. Mass vaccination of the entire population risks the emergence of a deadly superbug. Nobel Laureate Luc Montagnier has warned mass vaccination during a pandemic is a blunder that is creating the variants. If you love Grandma, don’t get the jab since it will put her at risk.