“Photos, or it didn’t happen.”

That’s a saying we have around here.  I’m not sure where it originated.  In any event, it’s become a popular phrase, and we generally try to oblige.

One of the must-see sights in Chiang Rai, Thailand is Wat Rong Khun, or the White Temple.  It’s less a “temple” in the strict Buddhist sense than it is a frolicking, impudent, and eclectic art exhibition mixing traditional Buddhist themes with modern entertainment and political icons, many of them from the West and familiar to the hundreds of tourists who flock to the temple each day.

The original temple, whose age is uncertain, had fallen into a sad state of disrepair, and was almost a ruin, when it and the grounds were taken over in the late 1990s by one of Thailand’s premier artists, Chalermchai Kositpipat. He’s spent at least $1 million (USD) of his own money turning the temple into a kitschy, sometimes irreverent “temple” of modern art which sometimes runs afoul of the country’s traditional ideas of what a temple should be, and which receives no government funding as a consequence. Hello Kitty, incredibly popular in Thailand among adult women–it’s jarring to see so many of them with Hello Kitty backpacks, shoes, watches, T-shirts–makes an appearance, as does the Hell Priest. From the other side of the world, there’s a mural that depicts a plane hitting New York’s Twin Towers as Spiderman looks on.  (That one’s been controversial, even outside Thailand.)

I’m probably far less connected to popular Western culture than is the average resident of Thailand, so I dare say I missed most of the clever allusions from this side of the pond, and I can’t say I loved much of the art itself, some of which is distinctly creepy.  (Not as creepy as some of the art in the Black House Museum, though.)  But the experience, and one’s first sight of the temple, certainly is spectacular.  More spectacular from a distance, I think, when the temple looks ethereal and beautiful.  Close up, the creep factor intensifies, and some of the art is just discomfiting to look at, as you walk through representations of hell in order to understand that you must forgo the world’s temptations in order to get to Nirvana.  (Somehow, in the midst of all this magnificence and ostentation, this seemed a bit ironic to me–after all, the building of religious significance in which I feel the greatest sense of holiness and peace is a tiny, thousand-year-old almost-ruin in the Gloucestershire countryside–but who am I to say?) 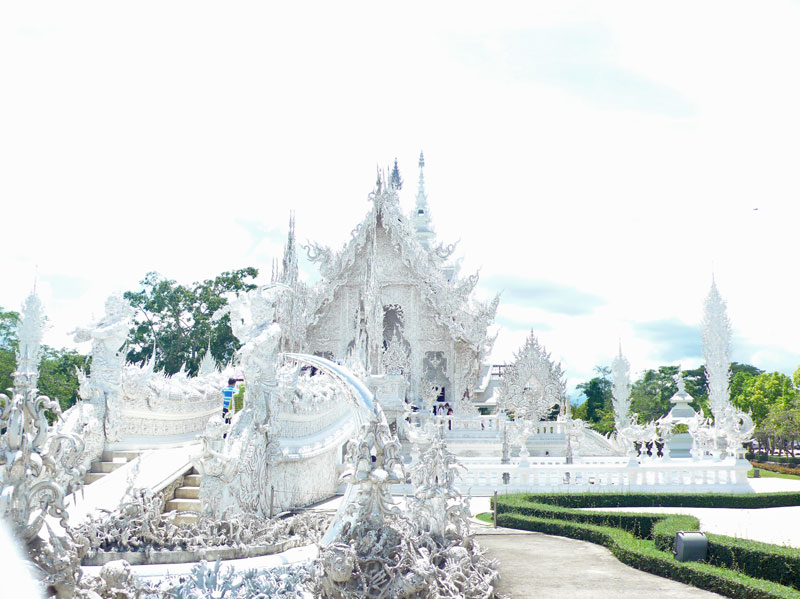 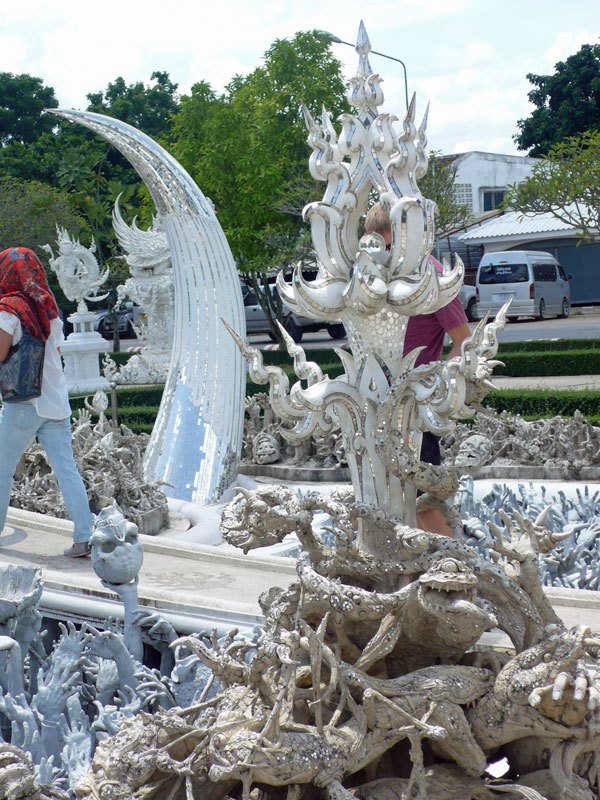 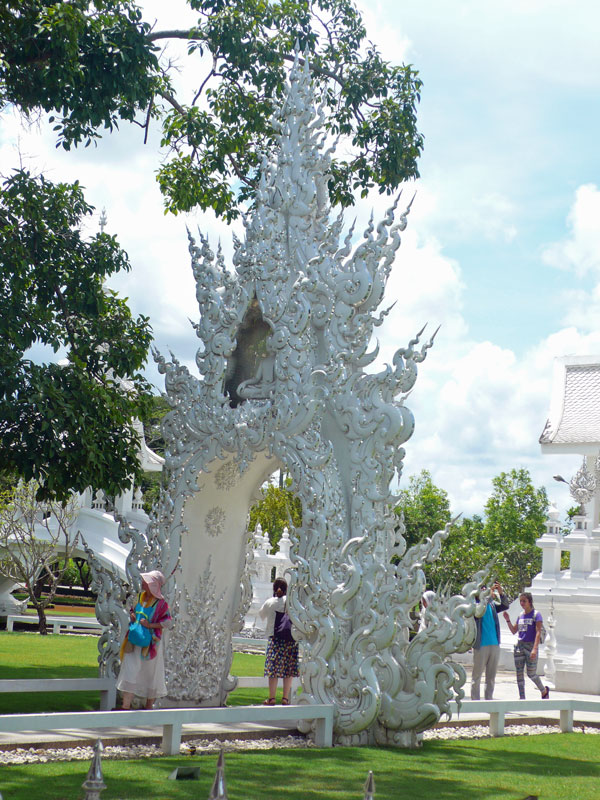 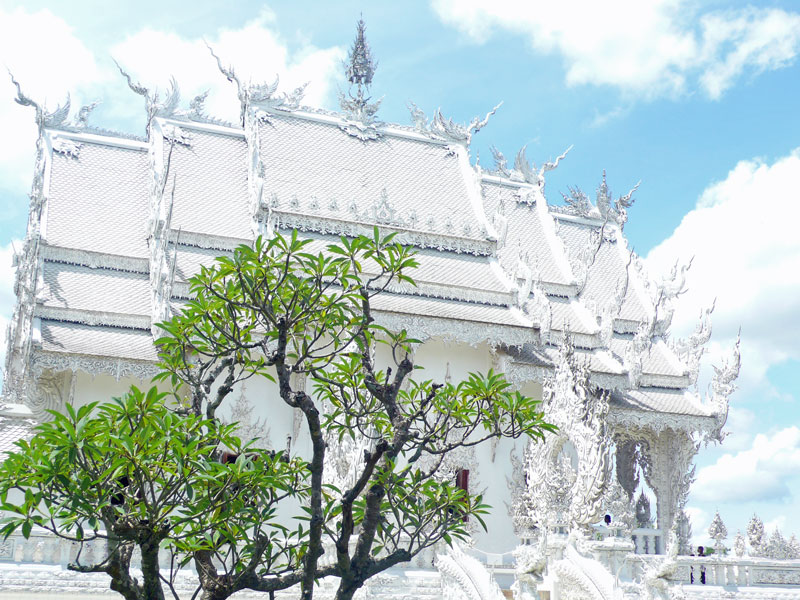 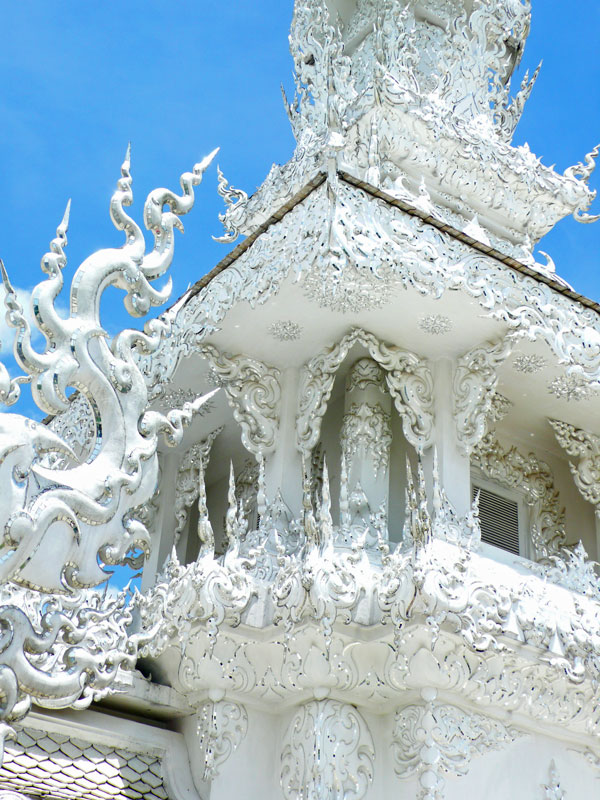 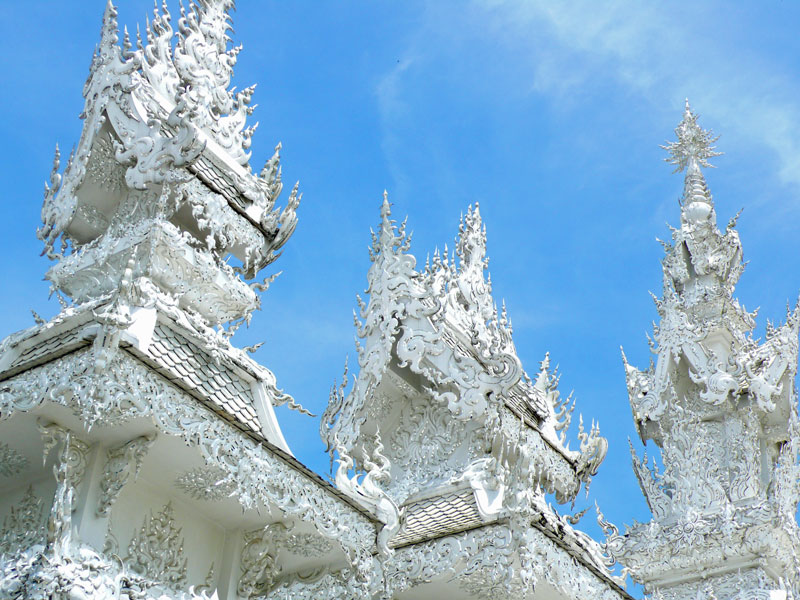 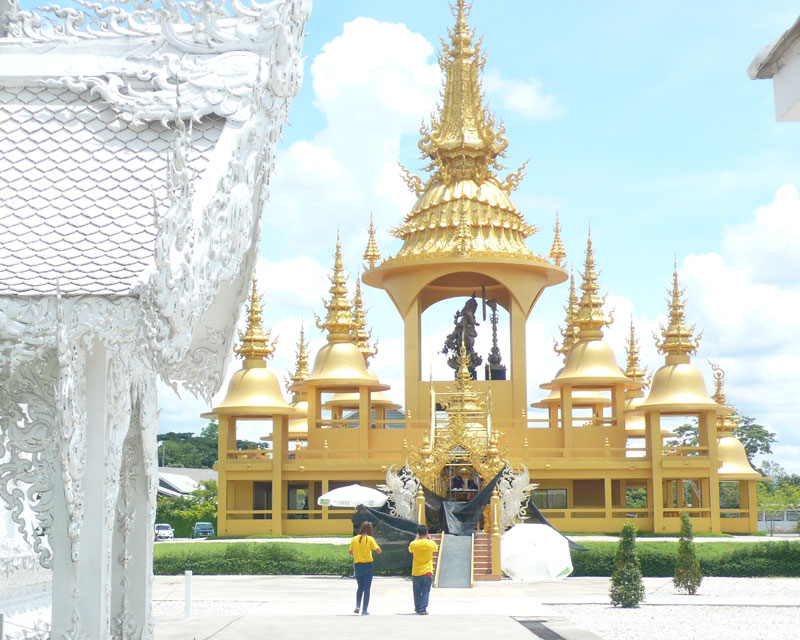 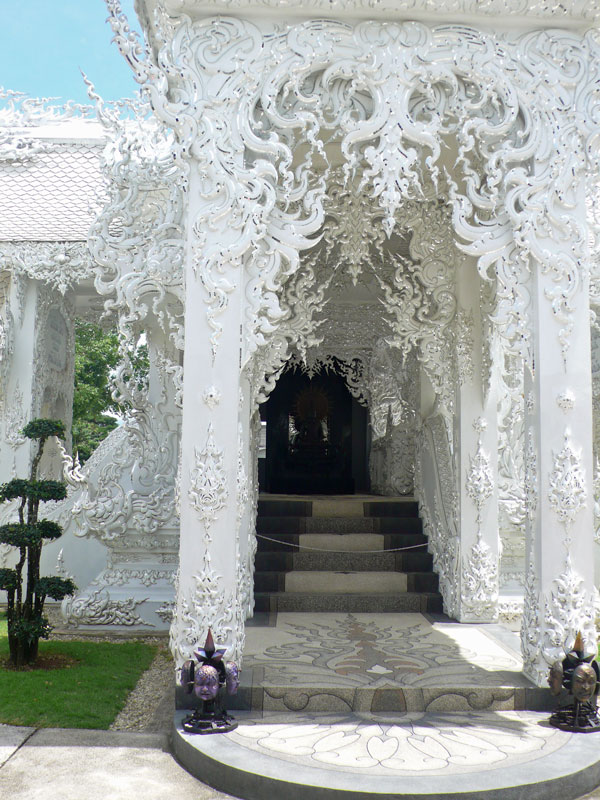 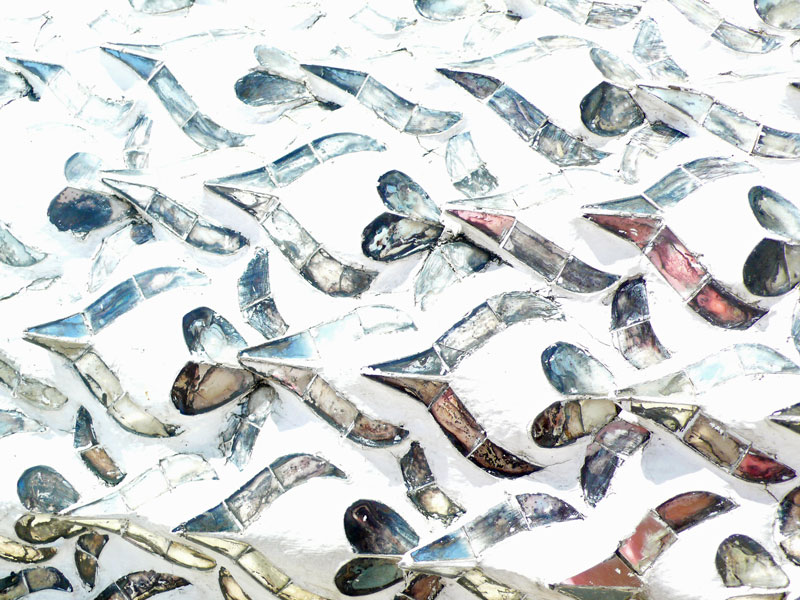 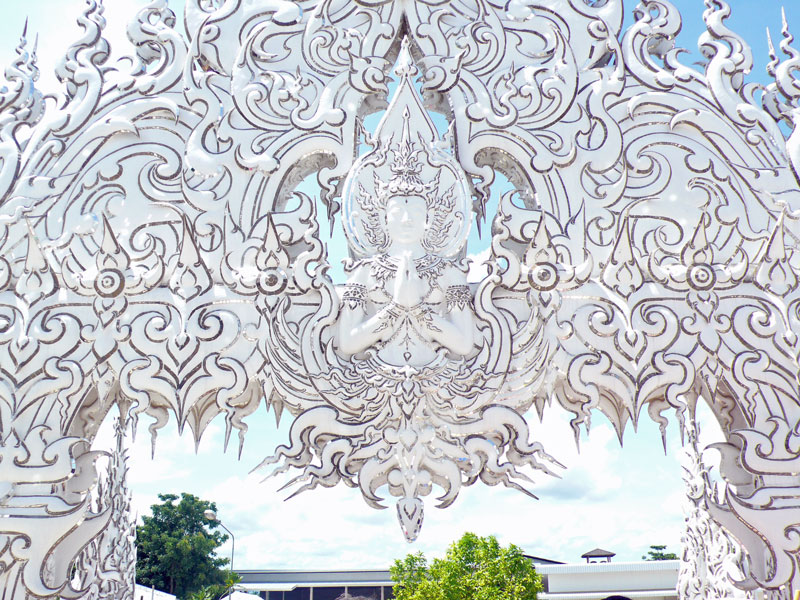 Another interesting, earlier, aspect of my trip to Chiang Rai in July of 2018 was that the “soccer boys” were rescued from the Tham Luang Caves shortly after I arrived.  The amount of news coverage, the presence of international reporters, the traffic madness (even more than usual), and the difficulty of getting around due to the number of closed roads–all of that was stunning.  Once the boys were rescued on July 9 and 10, they were brought to the local hospital for treatment.  I had occasion to visit the facility myself a few days later, and it was a complete madhouse, thanks mainly to the Western media camped out in the parking lot.

I was at the old golf course (and occasional military airstrip) when the helicopter carrying the Thai Navy SEALs who’d conducted the rescue arrived back in Chiang Rai proper on their way back to HQ.  Brave, strong, wiry men who all looked very relieved, and very glad to be going home, and who I’m sure were remembering their brother SEAL who died in the rescue.  This photo was taken on July 11: 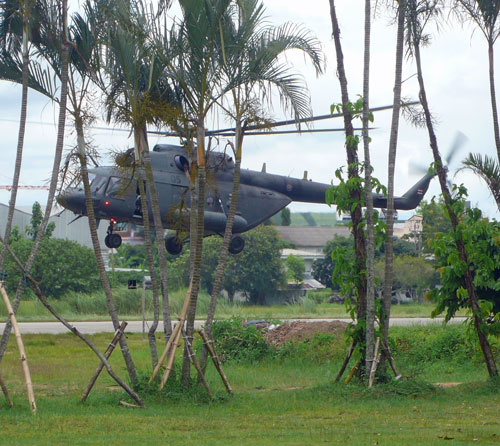 A documentary about the boys’ ordeal, titled The Rescue, just came out.  Given the sensationalized and in some cases very ugly coverage of the story, I’m in two minds whether or not to take a look.  But the trailer looks very fair and very honest.**

**I just pray to God that I don’t appear in the film somewhere, with a distinct “News at 11!” vibe, wobbling around uncomfortably on the back of a motorcycle, sharing a beer with some charming British and Australian expats in a bar and talking about their friend Vernon Unsworth, or wandering around aimlessly in the “Topps” or “Big C”  Market, marveling at the fact that one could buy monosodium glutomate in ten-pound bags, and wondering what was coming next.