Treasury Secretary Janet Yellen explains why the Biden Administration wants to snoop on every bank account with $600 or more in transactions.

“There’s a lot of tax fraud and cheating that’s going on.” Treasury @SecYellen tells @NorahODonnell the proposed $600 IRS reporting requirement for banks is “absolutely not” a way for the government to peek into American’s pocketbooks but to hold billionaires accountable.

Right, because everyone is well aware of that trick billionaires use to hide their earnings by splitting them among two million $500 bank accounts.

I mean, come on, can you even imagine how you would keep track of that many passwords?

This is an administration that sent at least $800 million in stimulus checks to people serving time in prison, but rather than audit or control the Government’s only irresponsible spending, they want to add $3.5 trillion more of it and go after all those “billionaires” with $600 bank accounts. 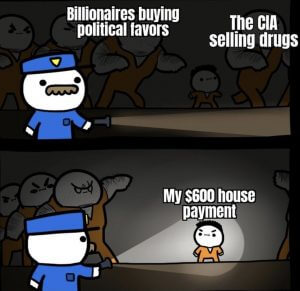 Just to clarify: 1. This proposal isn’t about billionaires, it’s about finding tradesmen who work off the books and waiters/waitresses underreporting their tips. And incidentally, giving the Feds another authoritarian tool to wield against those they designate as “domestic terrorists” for speaking out at school board meetings or engaging in some other form of political opposition to the ruling party. 2. The Democrats know most of their base is so stupid that they can justify almost any policy on the basis of “we’re going after billionaires” and their voters will lap it up like 81 million Pavlov’s dogs.