I’m hardly the optimist in this crowd about the possibility of us ever having another Republican president, given the implausibility that Joe Biden — that man of plagiarism, exploitation of his family tragedies for political gain, complete and utter foolishness about foreign policy, lack of accomplishment even in the arena of politics (or any kind of real-life endeavor, for that matter) other than getting elected, racist persecutor of Clarence Thomas, questionable cognitive function, and all-around low character — ostensibly got the most votes of any presidential candidate in American history including the deified Barack Obama, while campaigning from his basement.

Sure, he had a lot of help from the DNC-complicit media: Russia hoax, Charlottesville slander, threat to “our” democracy. . . that last bit was a half-truth. Trump was a threat to their Deep State oligarchy. And then there was ballot harvesting and unconstitutional (read, illegal) changes to voting procedures in several states, dodgy ballot counting in key districts, and anomalies like Trump winning 90% of bellwether districts, but still “losing” the election. . . The Left has figured out how to steal national elections. State and local are next.

If the next Republican president wants to shrink the federal government, he could learn a thing or two from Donald Trump. I take this information from the PJMedia article by Rick Moran titled, Biden Reverses Another Trump Policy: Bureau of Land Management Headquarters to Return to Swamp.

Here’s the Trump administration’s geniosity by the numbers:

*328 BLM positions were slated to move to Grand Junction, CO, from DC.

*Just three — that’s right, 3.0 — made the move, and ultimately 80 positions were left unfilled.

Lord, I love Donald Trump. Now, I’m sure someone advised him of the common sense of moving the Bureau of freakin’ Land Management out onto — you know — the land the feds captured (someone else can start a thread about private property versus communism). But, the thing is, DJT was willing to take the advice and do the deeply statist unpopular thing of exiling an agency into the hinterlands away from The Capitol (yes, that’s a dystopian Hunger Games reference, in case you didn’t pick that up).

To get a sense of how much sense it makes to move the BLM from DC to Colorado, check out this map: 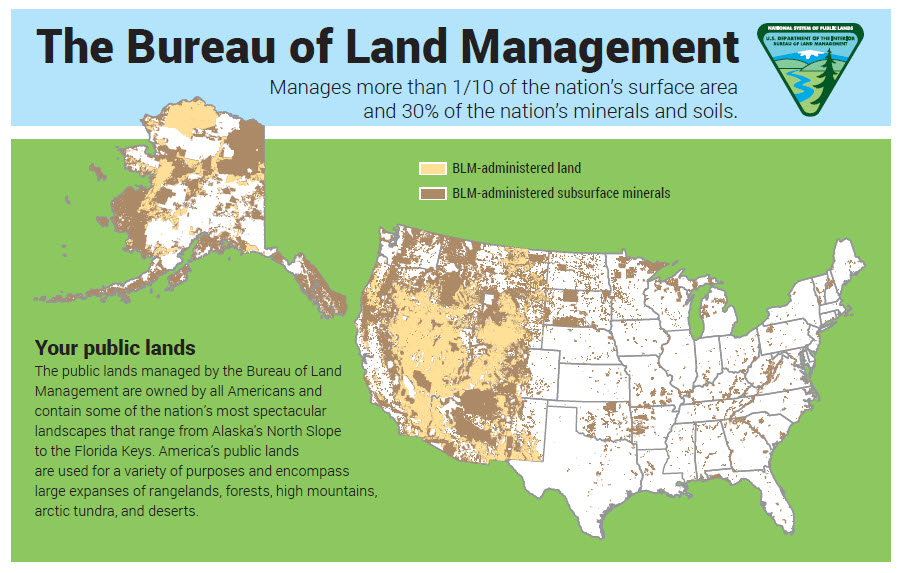 You gotta love lefty gaslighting, don’t you?  — “Your public lands.” Kind of like it’s “your” money, until it’s tax time and you haven’t paid “your” fair share.

Now Grand Junction isn’t exactly at the heart of BLM administered land, but it’s near the aorta. So, of course, Joe Biden had to undo the eminently sensible thing Trump did and move the agency back to the swamp. Swamp rats will be back on board before you know it.

But, this has given me (diabolical genius) ideas about moving all kinds of swamp inhabitants out of the swamp and into places that make more sense — or at least encourages them to take early retirement. And you’re probably thinking about it, too.

For example, I’d move the Department of Energy to either North Dakota, where federal employees could get a taste of what happens in local communities when fracking regulations become onerous, or to the Texas panhandle, where they’d have to live and work in the middle of a wind farm like rural Americans who aren’t among the protected class (see Kennedy, Ted; Nantucket Sound). The Fed I would offshore to Venezuela — just for perspective.

What are your diabolical genius ideas for diluting federal government agencies by moving them away from the concentrated power in Washington?