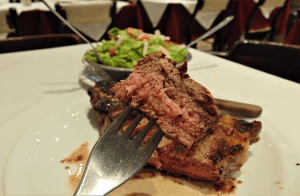 Growing up, I couldn’t wait for Sunday night. That’s when my father would cook dinner. My mother was an extraordinary person –a Master’s degree from USC, a member of the Red Cross team that followed Patton’s Third Army through Europe during World War II – but the woman could barely boil rice. Our weekly menu usually revolved around Swanson’s Salisbury steak frozen dinners and canned chop suey. But on Sundays, everything changed. Dad would don his grease-stained apron, flash his special set of stainless-steel tongs, and throw a couple of thick porterhouse steaks on the backyard grill. Oh, how this man loved a great steak. And his steaks were the best steaks I ever had in my life.

That is … until I went to Argentina.

I had arrived in Buenos Aires several years ago with moderate jet lag and a major appetite. I purposely hadn’t eaten in almost 24 hours so I would be significantly hungry and might actually finish an early dinner – something I don’t do very well the older I get. I asked around and chose the nearest parilla with the best reputation: Los Remolinos on Calle Sulpacha in Retiro. “Great steaks – what’s more …” But I stopped everyone right there. The other reasons didn’t matter. I knew steaks were legend in this corner of the planet and that’s what I wanted. A steak. A great steak.

And it was. Sorry, Dad. Your master grilling will always hold a cherished place in my memory, but you’ve been dethroned. This was the best steak I’ve ever had in my life. Oh my.

First, the big question. Why? I believe there are five reasons why my steak … why almost all Argentinian steaks … are that good. No, six. I just thought of a sixth reason. Here they are, in no particular order.

My entire dining experience took well over two hours but I never once looked at a clock. Because I elected to eat off-hours, the 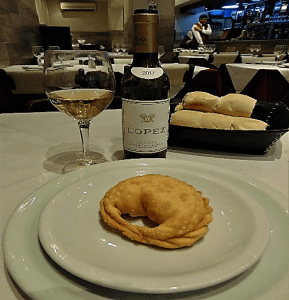 restaurant was not crowded, the way it would become after the sun set. I felt like a celebrity. So I began my meal with a glass of wine and an empanada – a light pastry stuffed with hot, spiced meat. This is the traditional appetizer.

Okay, a word about my wine. I know it’s white and it’s virtually a mortal sin to pair white wine with steak. But red wine usually gives me a headache and the chardonnay from the high-altitude vineyards in Argentina’s Mendoza province is among the best in the world, so that’s what I ordered. (But even my attentive server asked, “Uh, are you sure, senora?” “Si,” I answered. “Blanco.”) 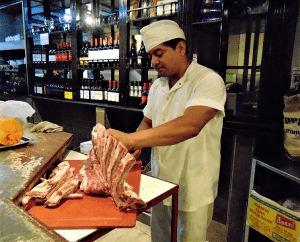 Next, I ordered my steak. There was a roster of cuts, from lomo (tenderloin) to entrana (skirt steak). I chose the chorizo, what we know as the ribeye. I had watched the head chef, Juan, butcher the meat when I first came in, so I knew my steak would have a personal signature on it. I love the fact that chefs like to butcher their own meat here; they’re able to customize every cut.

I ordered my steak medium-rare. I have drifted into medium-well-land with my advancing years but I knew this cut demanded a subtler grill. It was served with a crazy-fresh salad and the lightest vinaigrette I’ve ever tasted. (I wasn’t even asked about a dressing choice. Ranch?! And that would be … what, exactly?)

I could have ordered any assortment of sides, but why? My “individual” salad could have fed a family of four and my steak was a 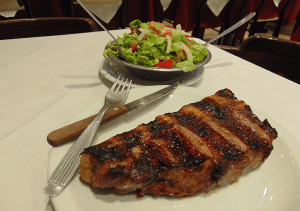 half portion. HALF portion. It took me over an hour to slowly, purposely, cut and eat each delicious mouthful. However, I was also determined to leave room for dessert. What else could it be but flan, the Latin-inspired baked custard they top with dulce de leche. Translated as “milk jam,” this is a close cousin to toffee but lighter. I couldn’t imagine finishing my meal any other way.

As I left Los Remolinos, the sun was just setting. I still had a full hour to casually stroll around the Retiro barrio and remember … and savor … and relish my steak. Oh my.

It really was the best steak I have ever had in my life, you know. I only wish I could have shared the meal with my father. He always loved a great steak.