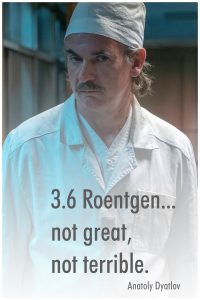 I’ve been trying to visit Chernobyl for about six years. In the summer of 2015, while working in Saudi Arabia I arranged a quick four-day visit to Kyiv. When looking for things to do I came across a Chernobyl tour. It sounded fascinating, and I booked a tour. Unfortunately, I messed up my dates and thought it was on the second day after my arrival, and it was on the first. Due to the paperwork and permits with the Ukrainian government, I missed my chance. Fast forward to spring 2020. I again booked a trip to Kyiv and this time a two-day tour. And, Covid shut down all travel two weeks before my trip.

Finally, with an airline credit expiring, and travel relatively easy, I rebooked for September. This time I made it.

I order to visit Chernobyl you have to book a tour, and they submit your passport and information to the government who arrange your pass into the Exclusion Zone, the 30 km radius area around Chernobyl that was evacuated after the 1986 disaster. A second inner 10 km zone includes the most contaminated area. My two-day visit started out in Kyiv where I met my tour guide Serghyj and the other four members of the tour, two Dutch, an Aussie, and an Austrian.

We were all given a dosimeter to wear at all times. Our guide also gave us our rules. Long sleeves all the time, no eating or drinking outside the vehicle. Don’t sit on the ground. Don’t lay your backpack or camera down. Try not to touch anything. He also told us “you can’t go into any buildings because of safety”. Damn. Then he said, ” but when you go into the buildings just make sure I’m not in the picture.” We were also cautioned to be quiet, and he was careful to take us to buildings where we wouldn’t be seen easily from the street, to try and avoid any police, unlikely, or Karens, more likely.

We arrived at the first checkpoint about 80 km from Kyiv and were processed. Much scrutiny of our tickets and passports. No photography was allowed at any of the checkpoints. 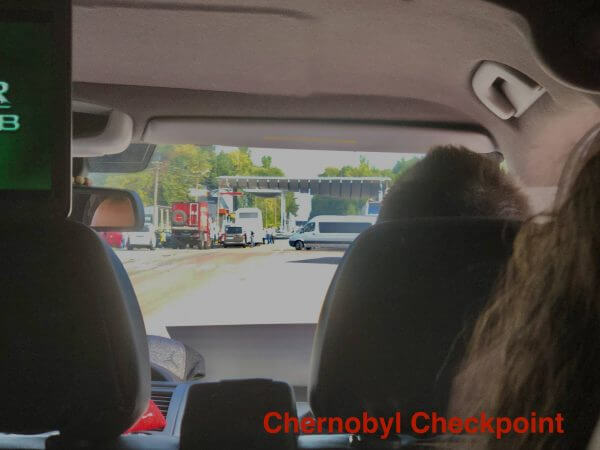 We drove from there into the Exclusion Zone, and passed the inner 10km checkpoint, making our way to Chernobyl town. There we were taken to some of the buildings, including the town hall where the trial of the Chernobyl operators was conducted. It’s an eerie location. A modern-day Pompeii where life just stopped on April of 1986. 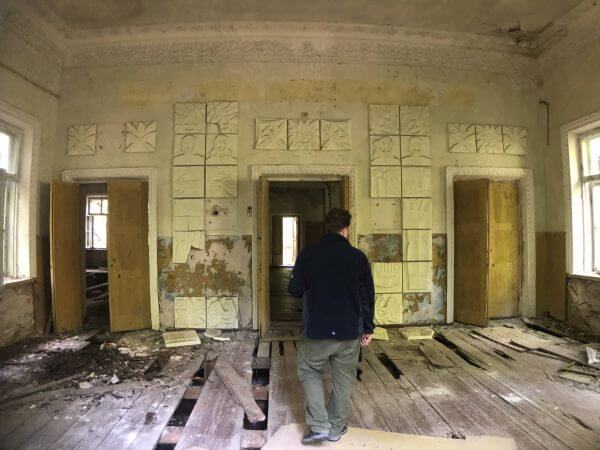 200,000 people were evacuated from the 2,600-sq-kilometer area, almost none of which returned. A memorial to the towns and villages is now located in Chernobyl listing all the names of the now ghost towns. We visited the fire station with a memorial to all the first responders, and then had lunch in a hotel in the zone. That afternoon we visited outside the reactor complex seeing the half-completed cooling tower for reactor #5. Chernobyl was planned to ultimately have 12 reactors making it the largest nuclear facility in the world. Just reactor 4 produced enough electricity to power Kyiv. Five and six were in construction when the accident occurred. The cooling tower was the first time I saw significant levels of radiation. I brought a Geiger counter for the trip. Background in Kyiv was about 12 microREM/hr. In the exclusion zone, it averaged about 29, and when we got to areas inside the cooling tower we were up to 401 microREM/hr. 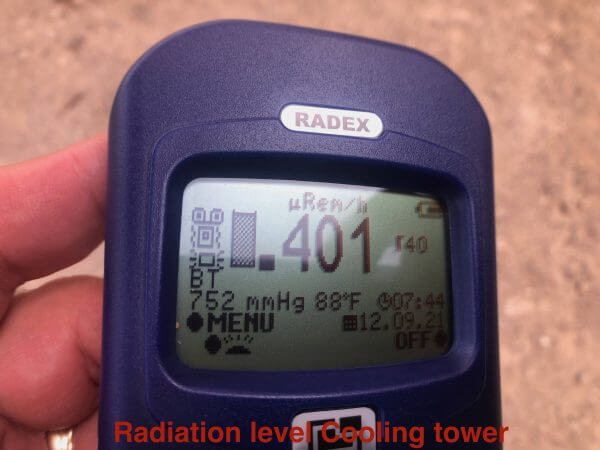 We then proceeded around the exterior of the reactor complex. The four reactors are all officially being decommissioned. Every weekday, nuclear fuel is transported out under extreme security provisions. We were told the decommissioning won’t be complete until 2065. Seven thousand people work in the Zone, 2,500 at the power plant. We toured around the outside of the facility and visited a memorial to the “Liquidators”, the hundreds of thousands of workers who were involved in the cleanup after the accident, many getting extreme doses of radiation that killed them, shortened their lives, or caused lifelong health problems. 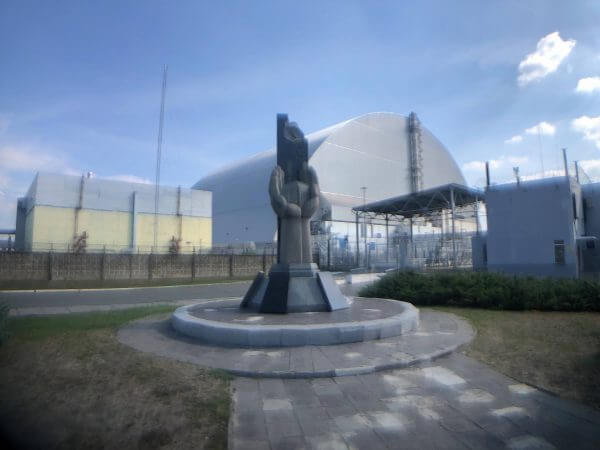 We then proceeded to the town of Pripyat. It was built specifically for the people building and operating the power plants. It was one of the most desirable places to live in the USSR. It also had one of the youngest populations of any city, with an average age of only 23. Almost exclusively filled with young families. We visited the elementary school first, which was strewn with dolls, books, posters, even beds for naps for the youngest students. Truly creepy to see. 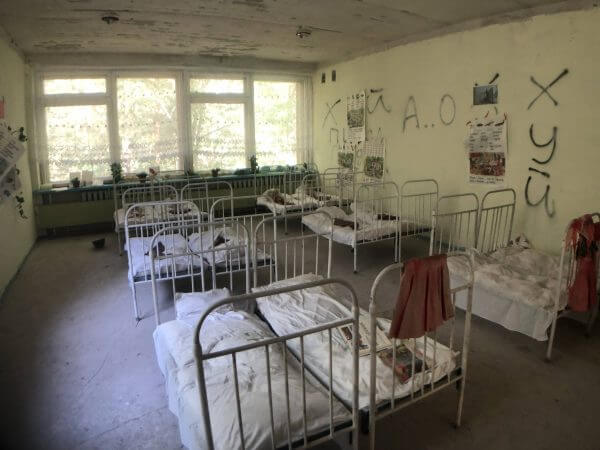 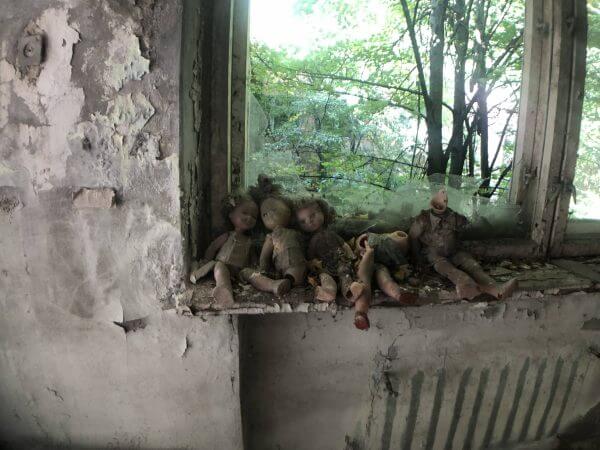 Other stops included the Police station, which had a surprising number of cells for such a small police station, the community swimming pool, and a 15-story apartment building which we climbed to the top to get a panoramic view of Pripyat. The apartments were small, most one bedroom, one bathroom, and a kitchen/living area. Spartan by our standards but luxury in the USSR. 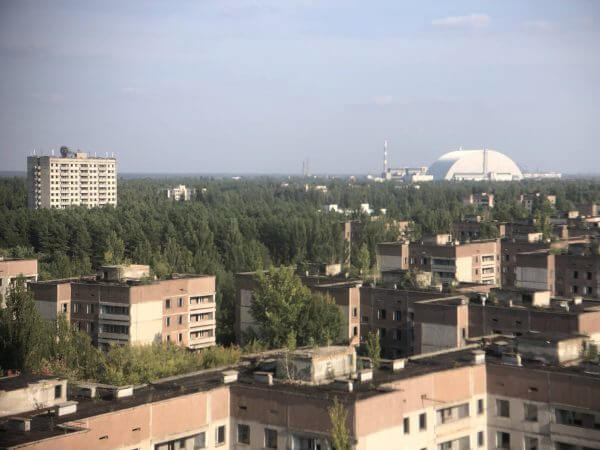 A highlight for me was the Hospital. Still jammed with medical gear, old bottles, exam tables, bedpans. I can imagine the chaos there, with radiation poisoned patients pouring in, and no equipment or medication to deal with them. The basement (now sealed off) has a room where the firefighting equipment was dumped, with extremely high rates of radioactivity. It’s the most dangerous place in Pripyat itself. 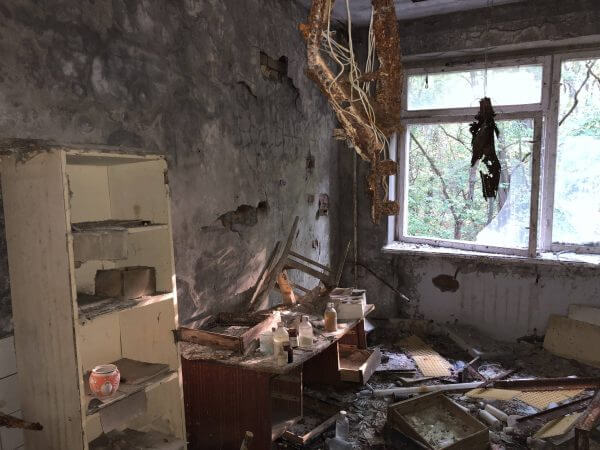 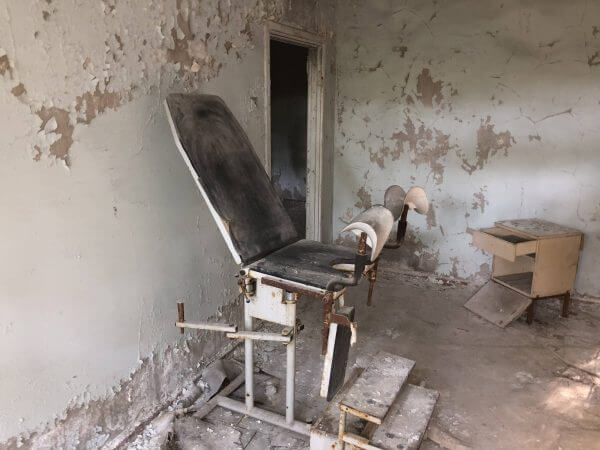 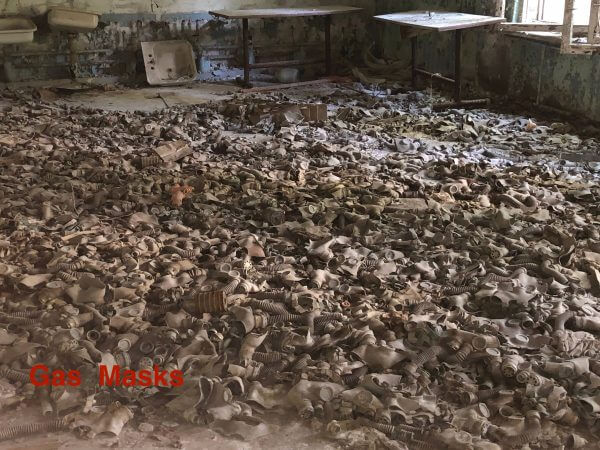 The day ended at the amusement park, with the iconic Ferris Wheel. The park remained me of any number of small carnivals I went to as a child. (Picture taken with my drone.) 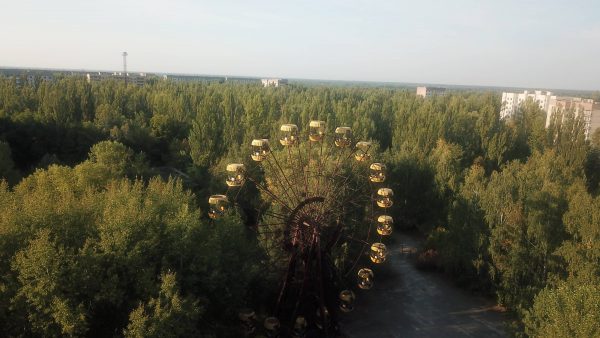 We retired to our hotel in Chernobyl where we had dinner and called it a day. The next day, while most of the group went to Pripyat again, I and one of the Dutch on the tour were taken to the power plant for our tour. This was truly the highlight of the trip for me. We met our guide, Julia who worked for the IAEA, were given another dosimeter and outfitted with protective clothing. Hat, jacket, respirator, gloves, and shoe covers. She then took us on our tour.

We started in the bunker, a nuclear shelter at the time, now the “safe room” for the plant workers in case of a radiation emergency. It was the location of the conference room where the first attempts at dealing with the accident were made, and the calls to Moscow. We went through a radiation detector and past security with much scrutiny of passport and ticket. From there we entered a corridor that is over a kilometer long which goes past each of the reactor control rooms on the right and reactors on the left, starting with Reactor 1, the oldest, through to the wall of Reactor 4. We stopped in an active control room where electrical power is still routed from Chernobyl to the Ukrainian power grid. While no power is generated since 2002, the transmission lines are still key for the national grid.

From there we walked to the control room of Reactor 3, the twin of Reactor 4. Unlike the first 2 reactors, the soviets decided to economize and built the 2 reactors in essentially 1 large building. Control room 3 still contains all the equipment which was used to control the reactor. 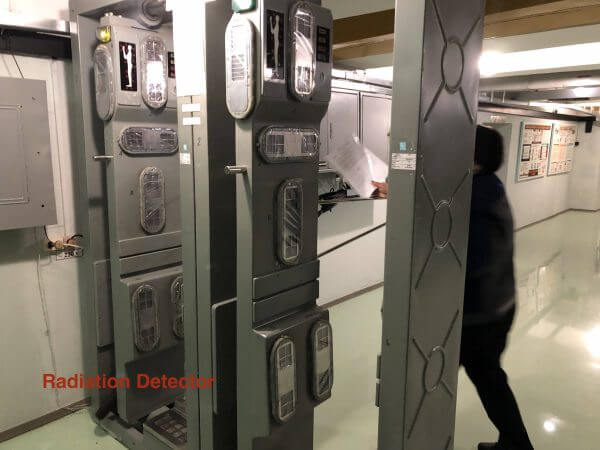 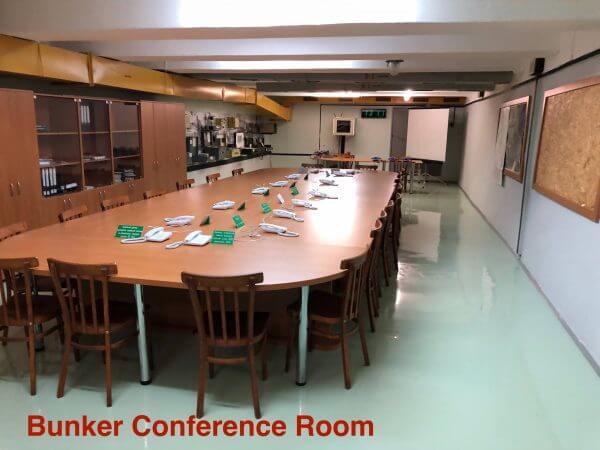 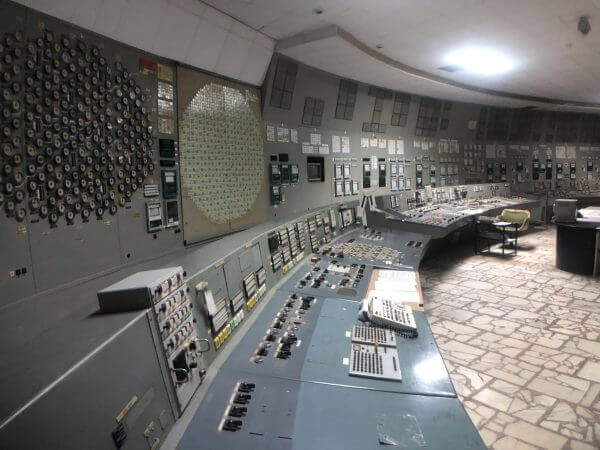 Located in the control room is the infamous “A zed 5 ” button , intended to SCRAM the reactor but on that fateful night, due to the inept operation of the reactor and a known design flaw in the control rods (Soviet corner-cutting at its finest), instead became the detonator for the explosion. 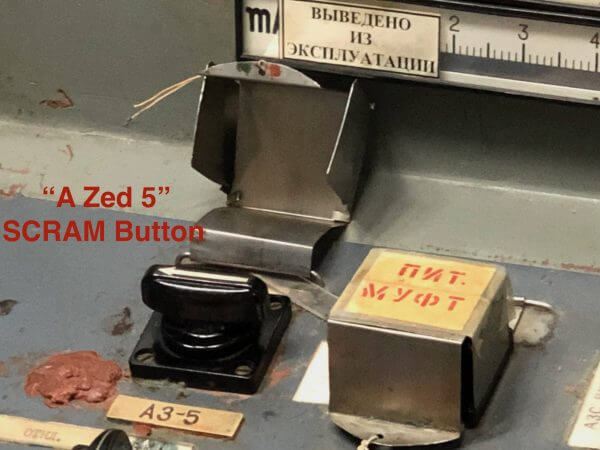 From there we proceeded to the computer room, which monitored the status of all the computers in the complex. It reminded me of the finest 1960s US computer equipment. Julia told us it was capable of giving the operators a printed update every two minutes on the reactor status. Two minutes is an eternity in a nuclear reactor. Beyond that we went to the end of the corridor, a walled-off area that lead to Reactor 4. We had to hustle in this area as the radiation was hotter there then anywhere else on the tour. On the wall to Reactor 4 is a memorial to Valery Khodemchuk, the only person directly killed by the blast whose body was never recovered. His family returns every year to memorialize him. 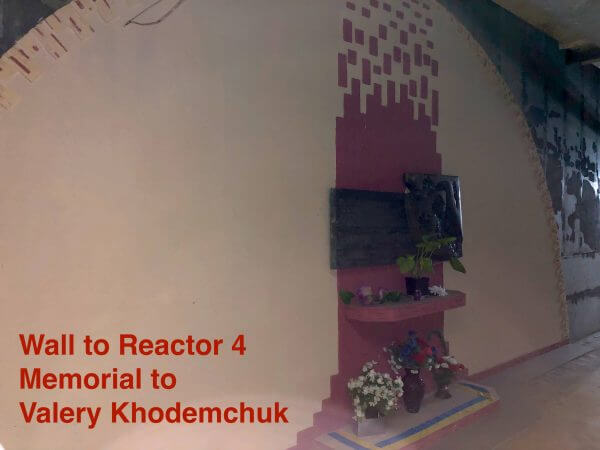 Bottom right near the wall is a pipe that leads from Reactor 4. That was where I found the highest radiation readings of the tour. 4.1 milliREMS/hr, hundreds of times higher than background levels 29 MICROREMs/hr. We hustled by on our way to the turbine rooms to see the gigantic power turbines, and finally headed out of the building. More radiation detectors, another security checkpoint, doffed our gear and turned in our site dosimeter. We were taken to an out building where we were shown videos of the construction of the new containment building, truly an engineering triumph. We left and I rejoined my tour.

Our last stop on the tour was the Duga Radar complex, known as the Duga Woodpecker for its tapping noise on a number of radio frequencies. A gigantic over-the-horizon radar to spot incoming US ICBMs, we visited the control rooms and receiver, the transmitter being kilometers away. Lots of conspiracy theories about the Duga, many Ukrainians either blame the explosion on the radar itself, or that the reactor accident was a coverup for the radar complex which cost billions and may not have worked as planned. Some real tinfoil stuff. 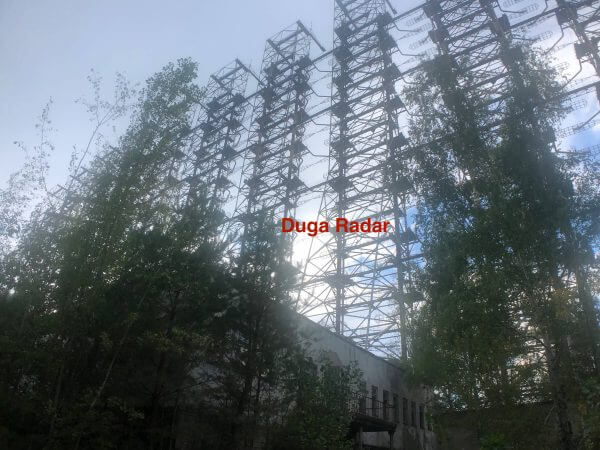 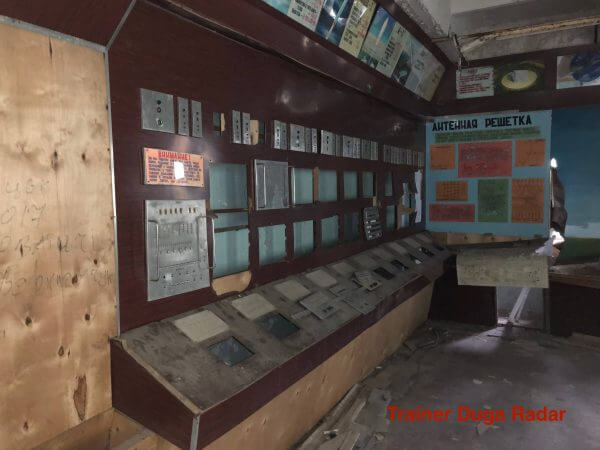 That was it, we proceeded to head back to Kyiv. We made one more stop, scattered around the Exclusion zone are random hot areas, just spots where the radiation is significantly higher, and it was impractical to try and clean the thousands and thousands of locations. so they just mark them. 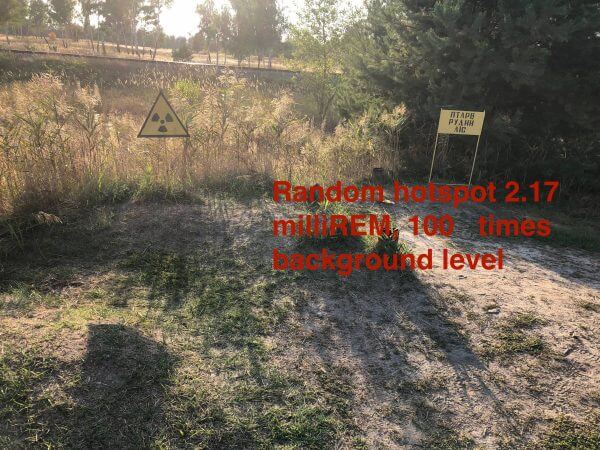 Well. All in all a fascinating 2 days. Glad I was able to finally experience it. Kyiv itself was a beautiful, vibrant city, full of beautiful churches, museums, and endless parks. Ukraine has been independent now for 30 years, so an entire generation has grown up identifying as Ukrainian and not knowing the oppression of the Soviet Union. I believe, at least in the Western half of Ukraine, that this will make it extremely difficult for their Russian “neighbors” to swallow the entire country. 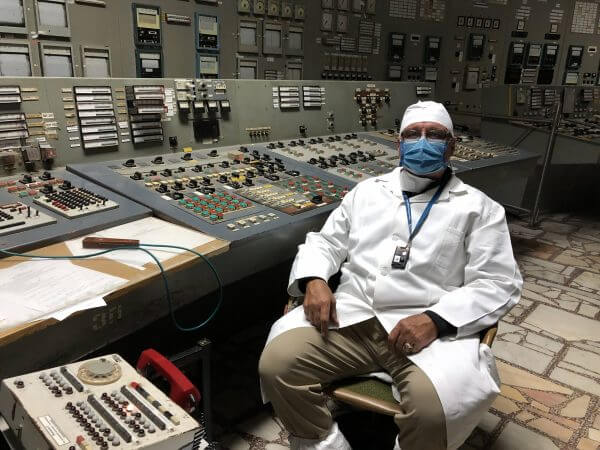