It probably doesn’t come as much of a shock to Ricochet readers that America’s most elite colleges and universities are often far from elite where their performance on free speech is concerned. Even so, as we’ve been writing at the Foundation for Individual Rights in Education (FIRE) over the last couple of weeks, their cultures of free expression have been showing some signs of seriously ill health. A quick rundown:

New on ERI: @AdGo & @pebonilla on why a Yale lecturer targeted for her ‘dehumanizing’ comment about coffee in rural Ohio should be a wake-up call for campus leadership. 1/26https://t.co/lYD0QsKxlr 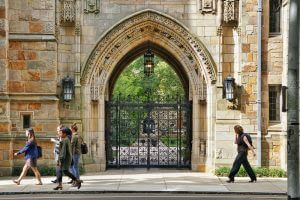 Yale, which protects its fragile students from dead white authors and offensive Halloween costumes, nevertheless featured a psychiatrist lecturing at Grand Rounds of her fantasies “unloading a revolver into the head of any white person that got in my way, wiping my bloody hands, like I did the world a [expletive] big favor.”

Grand Rounds is an educational presentation by which teaching hospitals augment routine clinical training with presentations of unusual cases or medical advances. It’s not a political forum nor a venue to permit social causes.

Yet Dr. Aruna Khilanani, a New York psychiatrist, gave a widely-advertised speech on “The Psychopathic Problem of the White Mind.” “There are no good apples out there. White people make my blood boil” she informed the assembled doctors-in-training.

I thought this was an interesting article about the type of cross-cultural experiences that could help everyone understand each other better, if not exactly agree with each other: My Semester with the Snowflakes. The part that got me thinking most: As the younger students started to express their thoughts, the young woman (truly a unicorn […]

Ours is a nation that continues to refuse to face its own history of slavery and racism. Peter Salovey, President and Chris Argyris Professor of Psychology, Yale University, 27 April 2016 For President Salovey’s statement to be true, here’s a truncated list of events from U.S. history that must be both inconsequential and insincerely motivated. […] In his recent op-ed in the Wall Street Journal, Yale President Peter Salovey tried to explain how colleges can make room for both freedom of speech and a culture of inclusion and diversity. Salovey wants to have his cake and eat it, too. The supposed tension between free speech and inclusion is false, he argues, because it is possible to pursue both ends simultaneously.

Several days later, Yale was again in the news for its sexual harassment tribunals. As Jennifer Braceras explains in her op-ed for the Wall Street Journal, “College Sex Meets the Star Chamber,” Yale’s current policy on sexual harassment has led to a massive expansion of Yale’s control over the life of its faculty, students, and staff. At first, look, Salovey’s defense of free speech and inclusion seems unrelated to Braceras’s argument about the reach of Yale’s sexual harassment directive. But they are part of the same problem.

Yale defines sexual harassment very broadly: “Sexual harassment consists of nonconsensual sexual advances, requests for sexual favors, or other verbal or physical conduct of a sexual nature on or off campus, which includes (3) such conduct [that] has the purpose or effect of unreasonably interfering with an individual’s work or academic performance or creating an intimidating or hostile academic or work environment.” To be sure, no one wishes to defend assaultive or abusive sexual misconduct. But the Yale definition is capable of a broader reading. Combine the italicized words in the basic definition with clause (3) and the threat that this definition poses to free speech becomes clear. The phrase “purpose or effect” reaches actions that some reasonable person thinks might have an adverse effect, even if no harm was intended by it. Nor is there any effort to limit what is meant by a “hostile academic or work environment,” or activities on and off campus. It is all too likely that eager Yale bureaucrats will read these provisions broadly in order to expand the scope of their own authority.