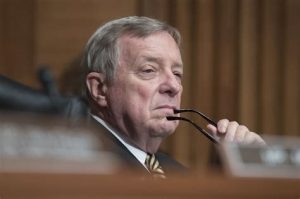 In the spirit of bipartisan compromise, Congressional Democrats are holding hearings on the January 6th Capitol protests. In the spirit of bipartisan compromise, they selected noted moderate Dick Durbin to chair this committee. On the first day of hearings, Mr. Durbin played a very carefully edited video of the Jan. 6 protests, and said that the committee must “use this hearing to explicitly condemn the use or threat of violence to advance political goals.”

Way back in his young and foolish days of youth (June 2020), Mr. Durbin was asked what he thought of the Black Lives Matter protests that were burning down cities across America. He said, “The largest motivation comes from the graphic video of the killing of George Floyd in Minneapolis.  I think that has inspired people more than anything to come out and speak publicly, as they are guaranteed the right to do so under our Constitution.”

Perhaps Mr. Durbin earned his reputation for bipartisanship by having such strong feelings about both sides of this issue. Or perhaps Mr. Durbin doesn’t care about what the truth is about whatever issue we’re talking about today. Perhaps he’s simply a bottom-feeding tyrannical sociopath who doesn’t care who he hurts as long as he gets power. (Poor people are suffering as their cities are burned? Screw them.) Nah — that can’t be true — he’s a Democrat. Democrats are nice. Anderson Cooper says so. So do Jon Stewart and Jimmy Kimmel. I mean, come on, right? 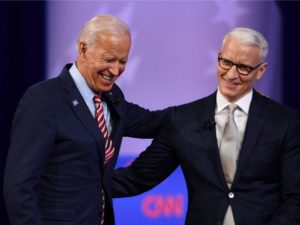 I searched for a similar picture with Anderson Cooper laughing with his arm around Donald Trump. Couldn’t find one – still searching – I’ll let you know when I find it…

What bothers me the most about this is that Mr. Durbin knows he can say whatever he wants, and nobody in the media will call him on it. What’s even worse, is that he’s right.

What do you get when you try to operate a democratic republic with no functioning media? You get Dick Durbin. You get a lot of other tyrant wannabes. And you eventually get tyranny. 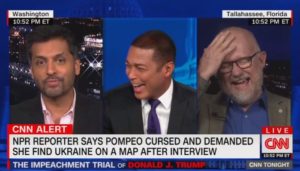 Laughing at the rubes.

If we had a media, they might wonder about the inherent contradictions in that last sentence. But we don’t have a media.

And with no media, there are no brakes.

This bothers me a great deal. But Mr. Durbin is happy about it. After all, it’s easy to be happy in this system. As long as you’re on the proper side. Don’t you want to be happy?