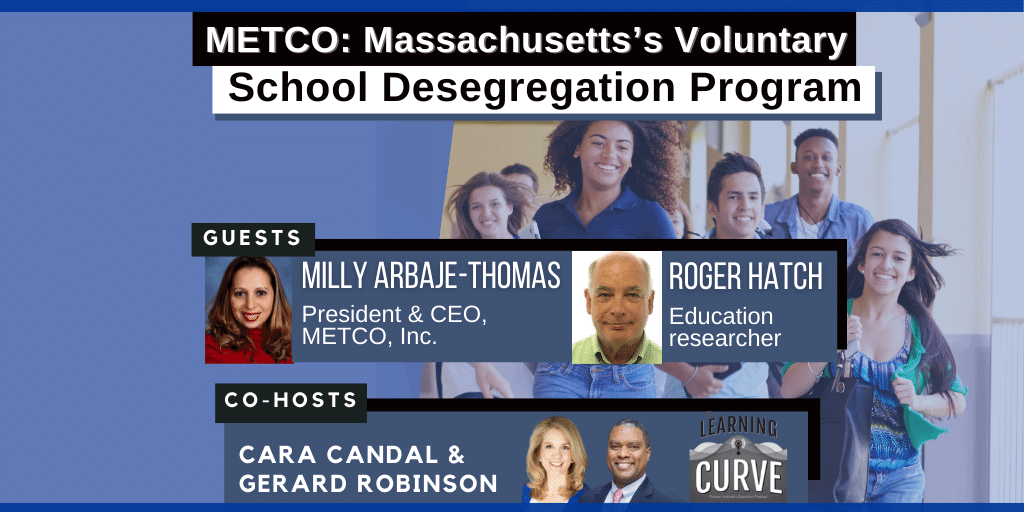 This week on “The Learning Curve,” co-hosts Cara Candal and Gerard Robinson talk with Milly Arbaje-Thomas, President & CEO of the Metropolitan Council for Educational Opportunity, Inc. (METCO) and Roger Hatch, co-author of Pioneer’s report, METCO Funding: Understanding Massachusetts’ Voluntary School Desegregation Program. Milly shares her background as an immigrant from the Dominican Republic and deep involvement with anti-poverty and neighborhood-based organizations in Boston. She describes METCO’s history, the challenges METCO participants face, and the program’s proven track record of achieving excellent results for minority students from Boston and Springfield. The discussion turns to METCO’s complex funding model, and Roger Hatch summarizes the main findings of his recent report. They explore institutional barriers to expansion, despite the program’s contribution to diversifying greater Boston’s suburban districts (METCO students constitute very high percentages of those districts’ minority student population). They talk about the fiscal implications of METCO in suburban districts, including state and district funding and transportation costs; and possible financial reforms.

Milagros “Milly” Arbaje-Thomas is the President & CEO of the Metropolitan Council for Educational Opportunity, Inc. (METCO), the largest and second longest-running school desegregation program in the country. METCO places 3,200 students from Boston into 33 participating suburban school districts with the goal of reducing racial isolation and increasing diversity. Prior to that, Milly spent 15 years at ABCD, Boston’s anti-poverty agency, supporting more than 85,000 low-income residents through its city-wide network of neighborhood-based organizations. Milly oversaw neighborhood sites in Parker Hill/Fenway, Mattapan, and Jamaica Plain as well as the Citywide Hispanic Center, and then served as Deputy Director of Field Operations for all sites. Milly also co-founded and served as President of the Roxbury Presbyterian Church Social Impact Center (SIC) for 14 years. She began her career as a clinical social worker at Brookside community health center in Jamaica Plain. Born in the Dominican Republic, Milly holds a Bachelor’s degree in Psychology with minors in Education and Women Studies, a Master’s degree in Clinical Social Work from Boston College, a Certificate in Non-Profit Management from Boston University School of Management, and an Honorary Doctorate degree in Humane Letters from Emmanuel College.

Roger Hatch spent a long career working for the Commonwealth of Massachusetts in the areas of school and municipal finance. For 20 years he was the Administrator of School Finance at the Massachusetts Department of Elementary and Secondary Education. In addition to supervising the school choice program, the office he led worked with the Governor’s staff, the legislature, advocacy groups, local officials, and the general public, to develop, calculate, and explain the Chapter 70 state aid formula.

The next episode will air on Weds., August 10th, with Prof. Charles Hobson, a resident scholar at the William & Mary Law School, 26-year editor of The Papers of John Marshall, and author of The Great Chief Justice: John Marshall and the Rule of Law.

Revisiting the Coleman Report on a free mind https://t.co/blXBYDDgxq

Charter-School Change Is a Victory for Children