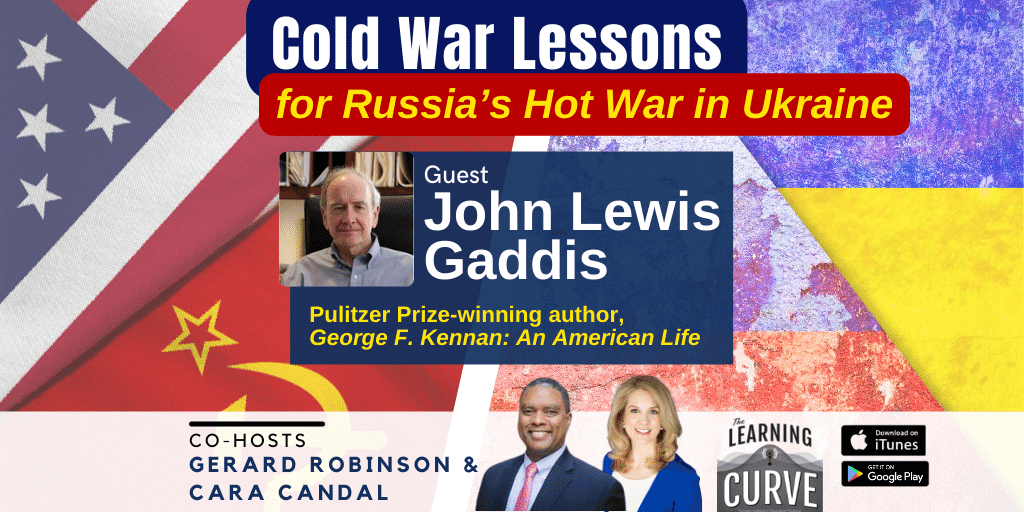 This week on “The Learning Curve,” co-host Cara Candal talks with John Lewis Gaddis, the Robert A. Lovett Professor of Military and Naval History at Yale University, and the Pulitzer Prize-winning author of George F. Kennan: An American Life. He shares some of the wider background knowledge, major historical themes, and key events that today’s students should know about the Cold War and its impact. He discusses the life and legacy of George F. Kennan, the subject of his Pulitzer-winning biography, who was the architect of America’s Containment policy toward Soviet communism and understood the true character of the Russian people and why communism would fail. They survey some of the outstanding political, military, literary, and religious leaders, as well as the murderous dictators, of the Cold War era. Prof. Gaddis explains why the West has often seemed less resolute towards Communist China and Putin’s Russia since the Cold War, and explores what teachers, students, and the public should know regarding Russia’s long-standing goal of dominating Ukraine. The episode concludes with a reading from Prof. Gaddis’s book, The Cold War: A New History.

Stories of the Week: In Massachusetts, education policymakers are moving ahead with a second review of the Boston Public Schools (BPS), which may lead to state receivership, after reports found that 16,000 BPS students attend schools performing in the bottom 10 percent statewide. Pioneer Institute’s Senior Fellow Charles Chieppo, most recently co-author of a RealClearPolicy op-ed on this topic, joins Cara for an in-depth discussion.

Dr. John Lewis Gaddis is Robert A. Lovett Professor of Military and Naval History at Yale University, where he teaches courses on the Cold War, grand strategy, biography, and historical methods. His most recent books include The Landscape of History: How Historians Map the Past (2002), Surprise, Security, and the American Experience (2004), The Cold War: A New History (2005), a new edition of Strategies of Containment: A Critical Appraisal of Postwar American National Security Policy (2005), George F. Kennan: An American Life (2011), and On Grand Strategy (2018). Professor Gaddis has received two awards for undergraduate teaching at Yale, as well as the National Humanities Medal and the 2012 Pulitzer Prize for biography.

The next episode will air on Weds., April 6th, with Dr. G. Edward White, David and Mary Harrison Distinguished Professor of Law at the University of Virginia School of Law, and the author of the three-volume book Law in American History from Oxford University Press.