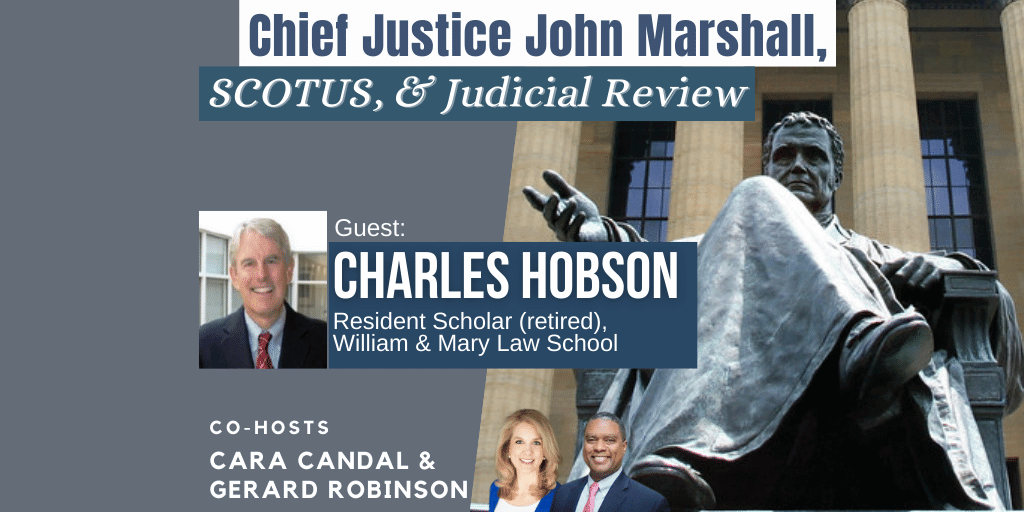 This week on “The Learning Curve,” co-hosts Cara Candal and Gerard Robinson talk with Dr. Charles Hobson, a retired resident scholar at the William & Mary Law School, 26-year editor of The Papers of John Marshall, and author of The Great Chief Justice: John Marshall and the Rule of Law. Dr. Hobson shares what students should know about the longest-serving, most important chief justice in the history of the Supreme Court, and his influence on our understanding of the U.S. Constitution. He reviews some of the most important Court decisions in American history. He also describes Marshall’s relationship with President Thomas Jefferson and their divergent views on the authority of the Court; as well as Marshall’s paradoxical position on African-American slavery. They explore the “Marshall Trilogy” of foundational Court decisions about Native Americans; and Chief Justice Marshall’s role and legacy of using the Court to safeguard the rule of law under the Constitution.

Stories of the Week: In Arizona, 40 students enrolled in the Applied Career Exploration in STEM (ACES) Camp engaged in immersive, hands-on activities and explored a wide variety of STEM careers. All 50 U.S. governors have agreed to expand K-12 computer science education in their states, prompted by a letter from 500+ business, education and nonprofit leaders urging an update.

Dr. Charles Hobson is a retired historian, affiliated with the Omohundro Institute of Early American History and Culture at the College of William and Mary. From 1979 to 2006 he was principal editor of The Papers of John Marshall, a twelve-volume annotated edition of Marshall’s correspondence, papers, and selected judicial opinions. His one-volume edition, John Marshall: Writings, was published by the Library of America in 2010. In addition to articles on Marshall and the Marshall Court, Hobson is the author of The Great Chief Justice: John Marshall and the Rule of Law (1996) and The Great Yazoo Lands Sale: The Case of Fletcher v. Peck (2016). He earned a B.A. at Brown University, then a M.A. and Ph.D. from Emory University.

The next episode will air on Weds., August 17th, with Doug Lemov, managing director of Uncommon Schools, and author of the international bestseller, Teach Like a Champion.

Just thought I'd tweet out this Associated Press story from November 2009. Give everyone a head start on how to pivot from teacher shortage alarmism to job shortage alarmism. https://t.co/QmfT4z5auw