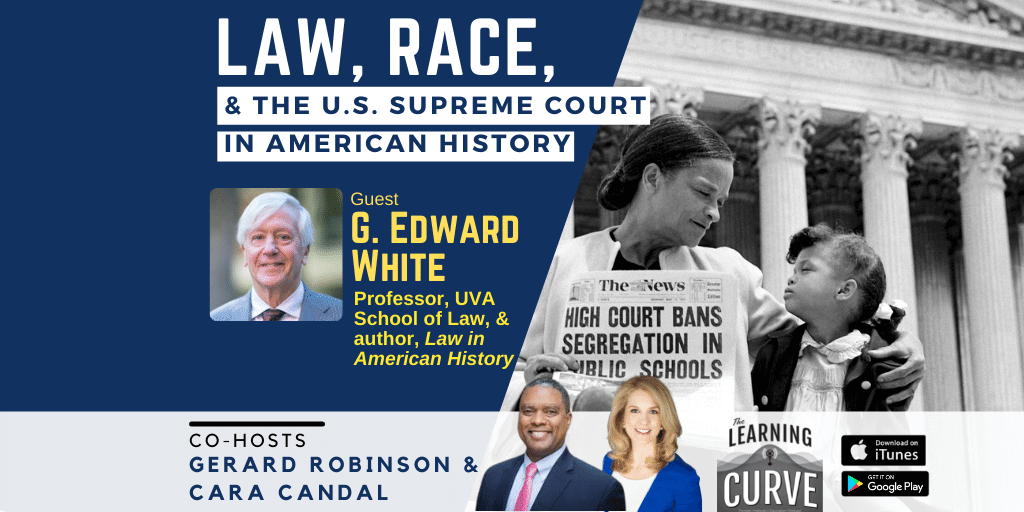 The next episode will air on Weds., April 13th, with Denisha Merriweather, the Director of Public Relations and Content Marketing at the American Federation for Children and Founder of Black Minds Matter.

Dr. G. Edward White is David and Mary Harrison Distinguished Professor of Law and University Professor at the University of Virginia School of Law. He is the author of twenty books, on subjects ranging from legal and constitutional history, to judicial biography, and the life of Alger Hiss, to baseball. Professor White’s most recent books include Law in American History, Volume III: 1930-2000; Law in American History: Volume II, From Reconstruction Through the 1920s; Law in American History: Volume I, From the Colonial Years Through the Civil War; and American Legal History: A Very Short Introduction, all from Oxford University Press. He is also the editor of the John Harvard Library edition of Oliver Wendell Holmes’s The Common Law. White’s books have won numerous awards, including final listing for the Pulitzer Prize in history in 1968. He was law clerk to Chief Justice Earl Warren of the Supreme Court of the United States for the 1971 Term. White is a member of the American Law Institute, the American Academy of Arts and Sciences, and the Society of American Historians. He is a member of the bars of Virginia, the District of Columbia, and the Supreme Court of the United States. White received his B.A. from Amherst College, his Ph.D. in American Studies from Yale, and his J.D. from Harvard Law School.

I had a fascinating talk with @EdNCES's Peggy Carr, who faces the daunting challenge of separating the "noise" from this year's @NAEP_NCES to report "true change in students’ performance." @The74 https://t.co/WiOSdEn6RG