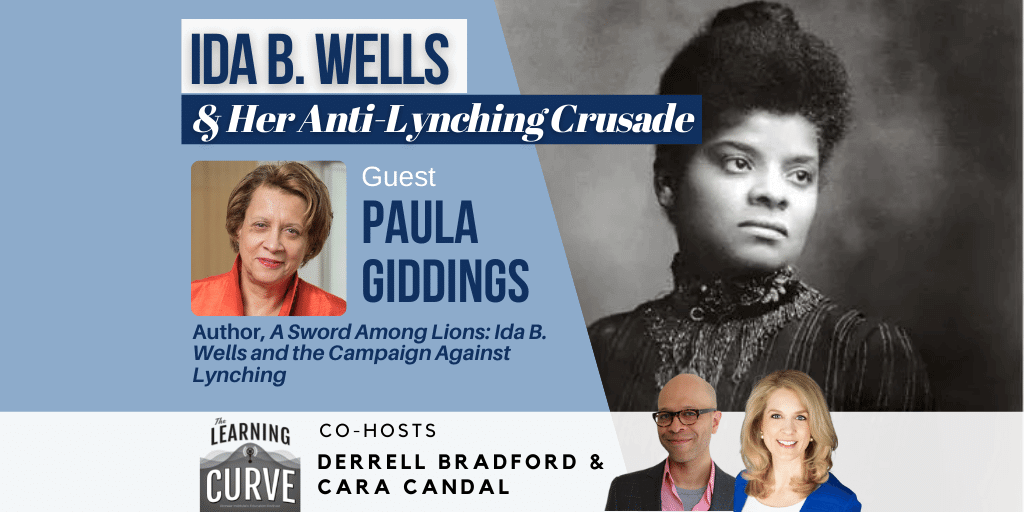 This week on “The Learning Curve,” Cara Candal and guest co-host Derrell Bradford talk with Prof. Paula Giddings, Elizabeth A. Woodson Professor Emerita of Africana Studies at Smith College, and author of A Sword Among Lions: Ida B. Wells and the Campaign Against Lynching. Professor Giddings shares how her experience watching historic events like the Civil Rights Movement and Freedom Rides shaped her career in academia and journalism. She discusses her definitive biography of Ida Wells, a late-19th-century Black female journalist and writer who is an unsung figure in American history. She reviews Wells’ underprivileged background – she was born into slavery in Mississippi during the Civil War – but also how she learned to read, attended a Historically Black College, and developed an appreciation for the liberal arts. She offers thoughts on how educators should use Wells’ many public writings, diaries, and firsthand accounts of the horrific crimes of slavery, segregation, the Klan, Jim Crow, and lynching in the late 19th and early 20th centuries to help students recognize this nation’s history of racial violence. They also explore Wells’ work as a reformer during an era known for overt racism, as well as rapid industrialization, corrupt urban political machines, and suppression of women’s rights. The interview concludes with Professor Giddings reading from her Wells biography.

Story of the Week: Cara and Derrell hold a moment of silence for the victims of the Uvalde school shooting, and discuss what is (and is not) being done to address the hundreds of thousands of disaffected and distant kids across the country who are struggling with mental health issues, especially in the COVID era.

Paula Giddings is Elizabeth A. Woodson 1922 Professor Emerita of Africana Studies at Smith College. Previously, Professor Giddings taught at Spelman College, where she was a United Negro Fund Distinguished Scholar; Douglass College/Rutgers University, as the Laurie Chair in Women’s Studies; and Princeton and Duke universities. She is the author of In Search of Sisterhood: Delta Sigma Theta and the Challenge of the Black Sorority Movement; When and Where I Enter: The Impact of Black Women on Race and Sex in America; and, most recently, the biography of anti-lynching activist Ida B. Wells, Ida: A Sword Among Lions – Ida B. Wells and the Campaign Against Lynching, which won The Los Angeles Times Book Prize for Biography and was a finalist for the National Book Critics Circle award. She is a former book editor and journalist who has written extensively on international and national issues and has been published by The Washington Post, The New York Times, The Philadelphia Inquirer, Jeune Afrique (Paris), The Nation, and Sage: A Scholarly Journal on Black Women, among other publications. In 2017, Giddings was elected to the American Academy of Arts and Sciences.