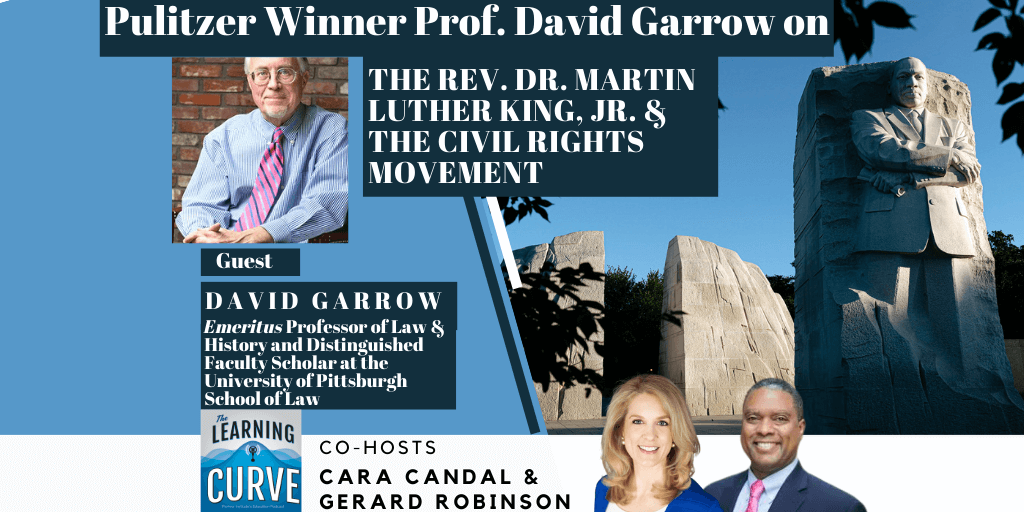 This week on The Learning Curve co-hosts Cara Candal and Gerard Robinson are joined by David Garrow, who was Professor of Law & History and Distinguished Faculty Scholar at the University of Pittsburgh School of Law, and is the Pulitzer-winning author of Bearing the Cross: Martin Luther King, Jr., and the Southern Christian Leadership Conference. Garrow shares his insights into the historical and religious context around key events and speeches in the life of the Rev. Dr. Martin Luther King, Jr. He examines the Montgomery Bus Boycott and the Southern Christian Leadership Conference, as well as King’s famous speeches, including the “I Have a Dream” and “I’ve Been to the Mountaintop.” Garrow discusses Dr. King’s legacy for students and educators, with reference to “Letter from a Birmingham Jail” and other writings that evoke the theme of human dignity through history, poetry, scripture, and America’s Founding ideals.

Stories of the Week: A new Boston monument to Dr. Martin Luther King, Jr. and Coretta Scott King has stirred controversy. Concerned about students’ ability to cheat with the use of advanced artificial intelligence, some higher education and K-12 officials want to ban it outright. Gerard reflects on a young Dr. King’s emphasis on the need for thinking intensively and critically, for the goals of living a good life and workplace success.

David Garrow was Professor of Law & History and Distinguished Faculty Scholar at the University of Pittsburgh School of Law. Previously, he taught at several noted colleges and universities, including Emory University, where he was Presidential Distinguished Professor. Garrow is the author of Rising Star: The Making of Barack Obama (2017), a 1,460 page pre-presidential biography, a New York Times bestseller and one of the Washington Post’s 10 best books of 2017. He authored Bearing the Cross: Martin Luther King, Jr., and the Southern Christian Leadership Conference (1986), which won the 1987 Pulitzer Prize in Biography and the seventh annual Robert F. Kennedy Book Award. Garrow is also the author of The FBI and Martin Luther King, Jr. (1981) and Protest at Selma (1978). Garrow served as a senior advisor for “Eyes on the Prize,” the award-winning PBS television history of the American Black freedom struggle and as editorial advisor for the Library of America’s two-volume Reporting Civil Rights (2003). More recently, he was featured in the 2020 Emmy Award-nominated documentary “Who Killed Malcolm X?” and the 2021 Academy Awards Oscar-shortlisted documentary “MLK/FBI,” which was based on his 1981 book and his 2002 and 2019 update articles. His work has appeared in the New York Times, the Washington Post, the Wall Street Journal, The Nation, Newsweek, and Time. Garrow graduated magna cum laude from Wesleyan University and received his Ph.D. from Duke University.