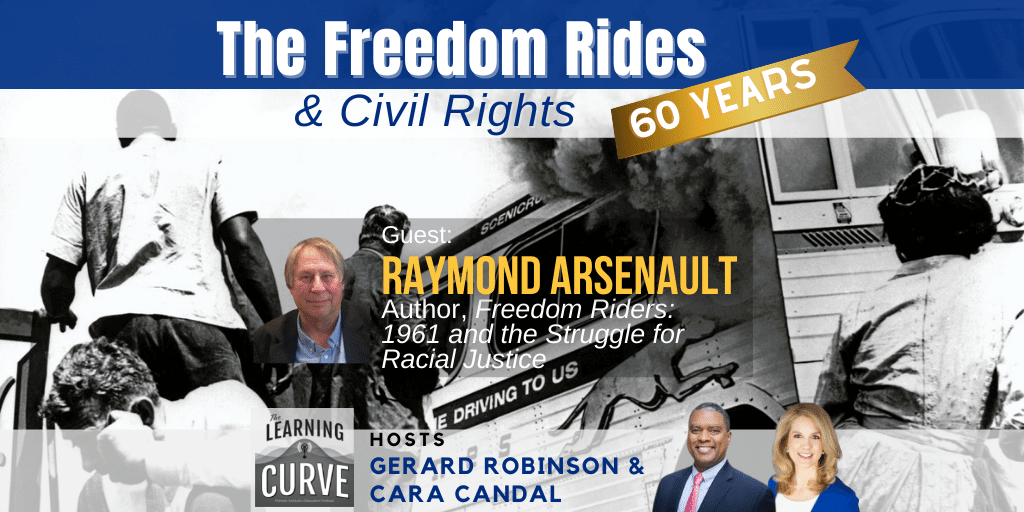 This week on “The Learning Curve,” co-hosts Gerard Robinson and Cara Candal talk with Raymond Arsenault, the John Hope Franklin Professor of Southern History at the University of South Florida, and author of several acclaimed and prize-winning books on civil rights, including Freedom Riders: 1961 and the Struggle for Racial Justice. He shares how he became interested in researching, writing, and teaching about the Civil Rights Movement. As we celebrate the 60th anniversary of the Freedom Rides, he describes key figures in the movement, such as Irene Morgan, James Farmer, Diane Nash, and John Lewis, as well as the fear, hostility, and mob violence the riders (and the press covering them) confronted. They review organizations like the Congress of Racial Equality (CORE) and the Student Nonviolent Coordinating Committee (SNCC); and how their opponents responded with terrifying violence across the South. He offers thoughts on how teachers and students should think about the tensions among the Kennedy administration, MLK and SCLC, and the often younger, student led-groups like CORE and SNCC. He concludes with a reading from his book about the Freedom Riders.

Stories of the Week: Civil Rights activist and education reform activist Dr. Howard Fuller’s support for school choice stems from his determination to provide Black students a quality education by any means necessary. Research from the Center for Research and Reform in Education shows that students in grades K-12 have been most seriously impacted by the effects of COVID-19-related learning loss.

The next episode will air on Wednesday, October 13th with guest, Robin Lake, director of the Center on Reinventing Public Education, a non-partisan research and policy analysis organization developing transformative, evidence-based solutions for K–12 public education.

Raymond Arsenault is the John Hope Franklin Professor of Southern History at the University of South Florida, St. Petersburg. One of the nation’s leading civil rights historians, he is the author of several acclaimed and prize-winning books, including Freedom Riders: 1961 and the Struggle for Racial Justice from Oxford University Press (2006), which served as the basis for the PBS American Experience documentary, Freedom Riders (2010). In 2011, he appeared on The Oprah Winfrey Show in an episode dedicated to the Freedom Riders. Prof. Arsenault also authored The Sound of Freedom: Marian Anderson, the Lincoln Memorial, and the Concert That Awakened America (2009) and the New York Times Notable Book, Arthur Ashe: A Life (2018).