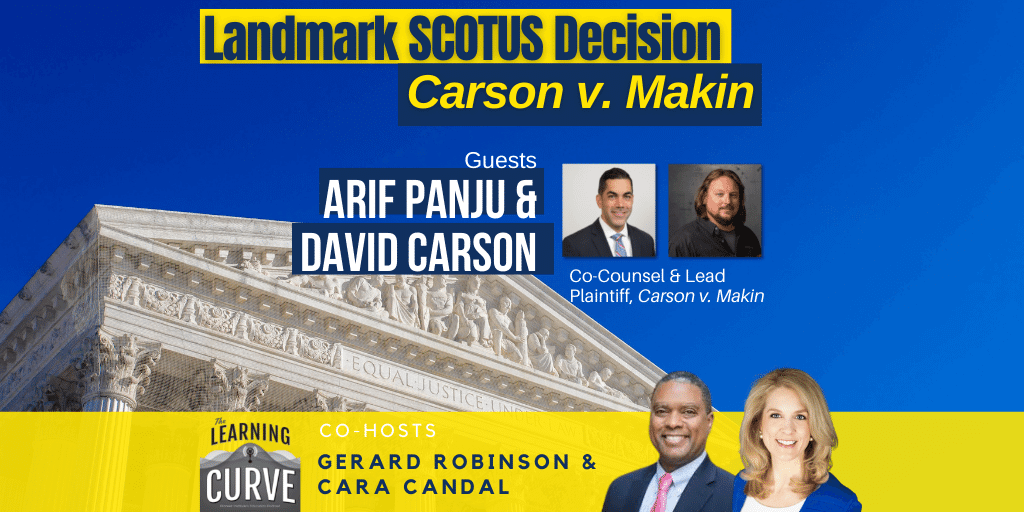 This week on “The Learning Curve,” co-hosts Gerard Robinson and Cara Candal talk with Arif Panju, a managing attorney with the Institute for Justice and co-counsel in the U.S. Supreme Court school choice case, Carson v. Makin; and David Carson, the lead plaintiff. Panju shares the key legal contours of Carson v. Makin and the potential impact of the Court’s decision in favor of the plaintiffs. They delve into the origins of the Maine school tuitioning program, and the change in the early 1980s that resulted in discrimination against religious families. They also review the 2020 Supreme Court ruling, Espinoza v. Montana Department of Revenue, which was a major victory for the Institute for Justice and school choice. Carson reflects on what motivated his family to join this case and take such a courageous stand for school choice and religious liberty, and what it has been like being involved in such a high-profile U.S. Supreme Court case.

Stories of the Week: Cara and Gerard review the impact of the Pell Grant program, launched 50 years ago this week, in helping to expand access to higher education. What would high school look like if it were designed to give students job-based learning experiences and marketable skills upon graduation?

Arif Panju serves as a managing attorney with the Institute for Justice. He leads IJ’s Texas office and litigates cases involving free speech, property rights, economic liberty, and educational choice. Arif was co-counsel in the case of Carson v. Makin in the U.S. Supreme Court. Arif’s legal work has resulted in court victories in both federal and state courts. Arif’s work at IJ has been featured by media outlets, including The Wall Street Journal, New York Times, Washington Post, The Atlantic, Texas Tribune, and dozens more nationwide. His opinions and views on legal issues have been published in several outlets, including the Dallas Morning News, Austin American-Statesman, and USA Today. Arif graduated law school with honors from Southern Methodist University. During law school he clerked on the United States Senate Committee on the Judiciary.

David Carson and wife Amy are residents of Glenburn, Maine. The Carsons were the lead plaintiffs in the recent landmark U.S. Supreme Court decision in the school choice case, Carson v. Makin. David and Amy enrolled their daughter, Olivia, at Bangor Christian Schools, which serves kids from K-12 grades, for her entire school career. The Carsons received no tuition assistance from the Town of Glenburn because Bangor Christian Schools is a religious school, even though Glenburn pays tuition on behalf of its other residents who select non-religious private schools for their children.

The next episode will air on Weds., July 6th, with Dr. Joseph Ellis, Professor Emeritus of History at Mount Holyoke College and author of the Pulitzer Prize-winning book, Founding Brothers: the Revolutionary Generation.

"Educators preach about growth and grit to children, but the system itself fails to encourage perseverance and curiosity," says @michaelbhorn . https://t.co/LxDzNok2Xo #EdChat

50 Years On, Pell Grants Have Transformed The Lives Of Millions Of Students

Blurring the lines between education and workforce