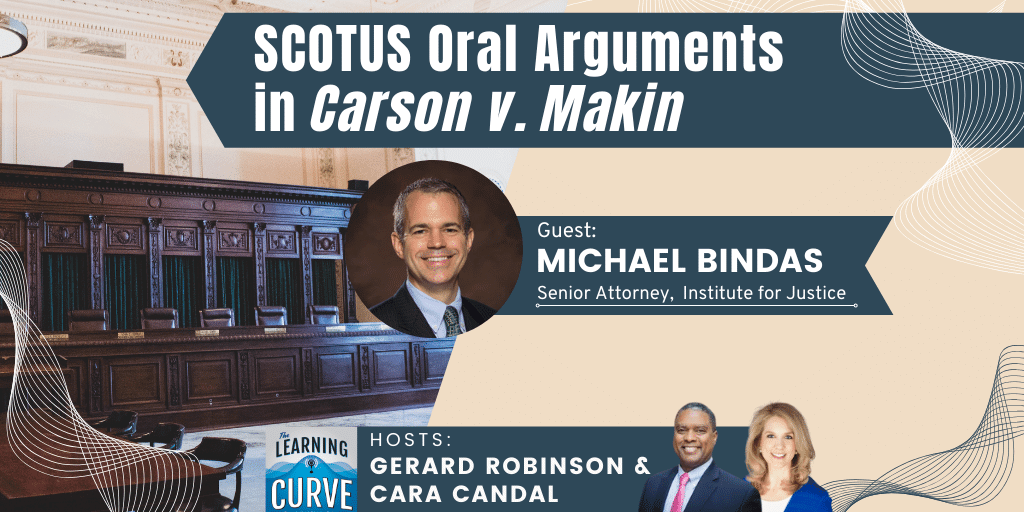 This week on “The Learning Curve,” co-hosts Gerard Robinson and Cara Candal talk with Michael Bindas, a senior attorney with the Institute for Justice, who represents the lead plaintiffs in the U.S. Supreme Court case, Carson v. Makin. They discussed last week’s oral arguments, and the background and key legal contours of the case. Bindas described Maine’s school tuitioning program, and the pivotal change in the early 1980s that allowed for the state to discriminate against religious families. They explored the questionable distinction that the U.S. Court of Appeals for the First Circuit drew between religious “status” and “use” in schooling, and the likely impact of the U.S. Supreme Court’s 2020 Espinoza decision, which was a major victory for the Institute for Justice and school choice. Bindas shared what makes him hopeful that the Court will rule in the Carsons’ favor, and what he thinks the next legal steps should be to support K-12 educational choice.

Read Pioneer’s amicus brief and op-ed in support of the plaintiffs in this case.

Stories of the Week: In Colorado, school districts are stepping up recruitment efforts to address the shortage of substitute teachers, and calling on parents to help fill gaps. In New York City, Mayor-elect Eric Adams’ first cabinet-level appointment is Schools Chancellor David Banks, founder of Eagle Academy, who promises to disrupt the bureaucracy.

Michael Bindas is a senior attorney with the Institute for Justice (IJ) and leads IJ’s educational choice team. He was part of IJ’s litigation team in Espinoza v. Montana Department of Revenue, in which the U.S. Supreme Court held the exclusion of religious options from Montana’s educational choice program unconstitutional, and he is currently IJ’s lead attorney in Carson v. Makin, challenging Maine’s exclusion of religious options from its town tuitioning program. Prior to joining IJ in 2005, Michael spent three years as an attorney with Perkins Coie. He is a former law clerk to Judge Rhesa Hawkins Barksdale of the U.S. Court of Appeals for the Fifth Circuit and served as an engineer officer in the United States Army and Pennsylvania Army National Guard before beginning his legal career. He received his undergraduate degree from the United States Military Academy and his law degree from the University of Pennsylvania.