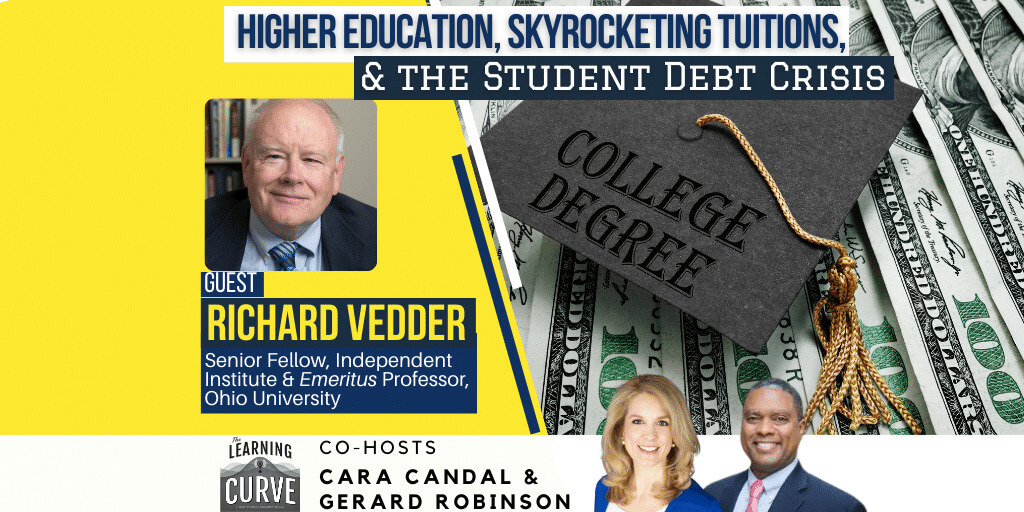 This week on “The Learning Curve,” co-hosts Cara Candal and Gerard Robinson talk with Dr. Richard Vedder, Senior Fellow at the Independent Institute and Distinguished Emeritus Professor of Economics at Ohio University. He shares analysis on the macro impact of COVID on the U.S. labor market, and the long-term economic prospects of American college students. He reviews insights from his recent book, Restoring the Promise: Higher Education in America, on the true cost of higher education to American society amid the student debt crisis, administrative bloat, controversial admissions policies, and intercollegiate athletics scandals. They discuss the need for greater transparency about students’ earnings potential, the key ingredients of higher education reform, and what he refers to as the “three Is”: information, incentives, and innovation.

Stories of the Week: In Arkansas, Governor-elect Sarah Sanders has hired Jacob Oliva, a senior chancellor in Florida’s education department, to lead reform efforts, and focus on school choice and early literacy. Congress recently passed a $1.7 trillion federal omnibus package that provides $70 million in additional funds for statistics, research, and evaluation within the U.S. Education Department.

Dr. Richard Vedder is Senior Fellow at the Independent Institute and Distinguished Emeritus Professor of Economics at Ohio University; and he is the Founding Director of the Center for College Affordability and Productivity in Washington, D.C. He is author of the books, Restoring the Promise: Higher Education in America, Out of Work: Unemployment and Government in Twentieth-Century America, and the monograph, Can Teachers Own Their Own Schools? New Strategies for Educational Excellence, and Going Broke by Degree: Why College Costs Too Much. His hundreds of articles and reviews have appeared in numerous scholarly journals, as well as in such publications as the Wall Street Journal, Christian Science Monitor, Forbes, National Review, CNN.com, Washington Times, and Investor’s Business Daily. And, he has been interviewed on Fox News Channel, ABC, NBC, Fox Business Network, CNN, PBS, C-SPAN, Fox Nation, NPR, and many other TV and radio networks and programs. Professor Vedder received his Ph.D. in economics from the University of Illinois.

The next episode will air on Weds., January 18th, with David Garrow, Professor of Law & History and Distinguished Faculty Scholar at the University of Pittsburgh School of Law, and the Pulitzer-winning author of, Bearing the Cross: Martin Luther King, Jr., and the Southern Christian Leadership Conference.

Is this really how higher ed should be governed?https://t.co/VCKgswm0t7