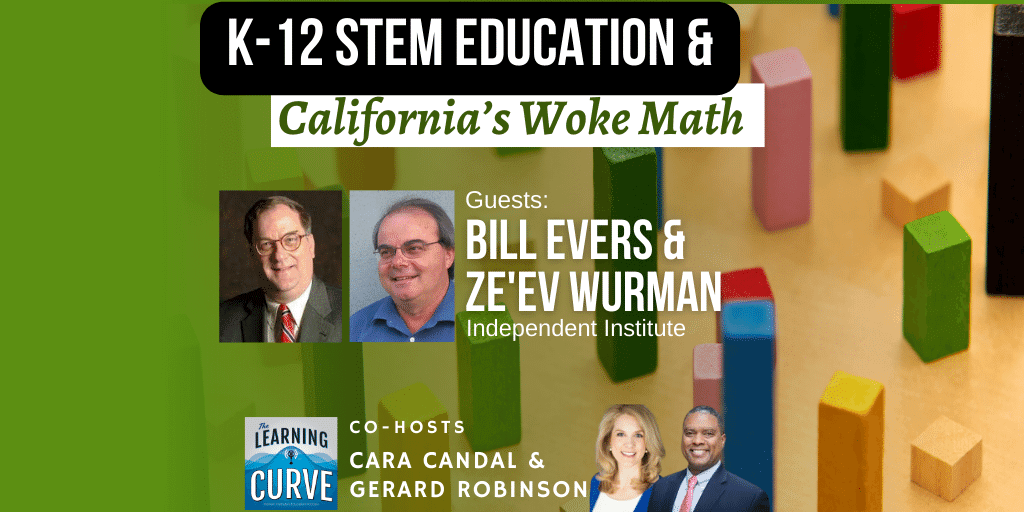 This week on “The Learning Curve,” Cara Candal and Gerard Robinson talk with Dr. Bill Evers and Ze’ev Wurman, of the Independent Institute, about the challenges of ensuring all students have access to quality K-12 math and science education in California and across the U.S. They review the findings of the 1983 report, A Nation At Risk, and international TIMSS and PISA data going back a decade, as well as recent NAEP results that highlight the ongoing educational crisis, compounded by COVID-related learning loss. They discuss some of the time-tested approaches taken by higher-performing countries such as Israel, and those in East Asia and Europe, to prepare students to succeed in STEM, and how state policymakers can address the gaps so America can become competitive with international peers in STEM fields. They share the findings of Dr. Evers’ Wall Street Journal op-ed about the rise of “woke math” in California, and how we can resist politicizing learning. They conclude with a review of a 2020 Pioneer Institute report that found that less than half of all U.S. high schools offer computer science instruction, and that women and people of color were underrepresented in those classrooms.

Stories of the Week: In Massachusetts, supporters of a proposed progressive tax claim the revenue will increased education spending – but will the measure instead harm the economy and reduce state resources for education investments? A program adopted by 19 colleges across the country is facilitating connections between conservative Christian colleges and liberal institutions to address religious and political polarization.

Dr. Williamson Evers is a Senior Fellow, Director of the Center on Educational Excellence, and Assistant Editor for The Independent Review: A Journal of Political Economy at the Independent Institute. Dr. Evers was the U.S. Assistant Secretary of Education for Planning, Evaluation, and Policy Development from 2007 to 2009; Senior Adviser to U.S. Secretary of Education Margaret Spellings during 2007; and former Research Fellow at the Hoover Institution. In addition, he was a member of the Hoover Institution’s Koret Task Force on K-12 Education from its beginning in 1999 until it wrapped up in 2014. From July to December 2003, he served in Iraq as Senior Adviser for Education to Administrator L. Paul Bremer of the Coalition Provisional Authority. His articles have appeared in such publications as Education Week, New York Times, Wall Street Journal, Los Angeles Times, and Christian Science Monitor, and he is a past member of the editorial board of Education Next. Dr. Evers received his B.A., M.A., and Ph.D. degrees in political science from Stanford University.

Ze’ev Wurman is a Research Fellow at the Independent Institute, Chief Software Architect with MonolithIC 3D Inc., and has over 30 years of experience in developing algorithms, CAD software, and hardware and software architectures. He has been a senior policy adviser with the Office of Planning, Evaluation and Policy Development at the U.S. Department of Education. He is also a Senior Fellow with the American Principles Project and throughout the development of the Common Core standards in 2009-2010, he analyzed the mathematics drafts for Pioneer Institute and for the State of California. In the summer of 2010, he served on the California Academic Content Standards Commission that evaluated the suitability of the Common Core standards for California. He holds over 40 U.S. patents and earned his B.Sc. and M.Sc. degrees in Electrical Engineering from the Technion, Israel Institute of Technology, in Haifa, Israel.

The next episode will air on Weds., September 21st, with Dr. Niall Ferguson, the Milbank Family Senior Fellow at the Hoover Institution, Stanford University, and a senior faculty fellow of the Belfer Center for Science and International Affairs at Harvard. He is the author of sixteen books, including Doom: The Politics of Catastrophe.

“May God Bless the memories of the victims of 9/11, and may He continue to bless the United States of America.” – President George W. Bush

Inside HigherEd: ‘Mining the Depths of Our Differences’