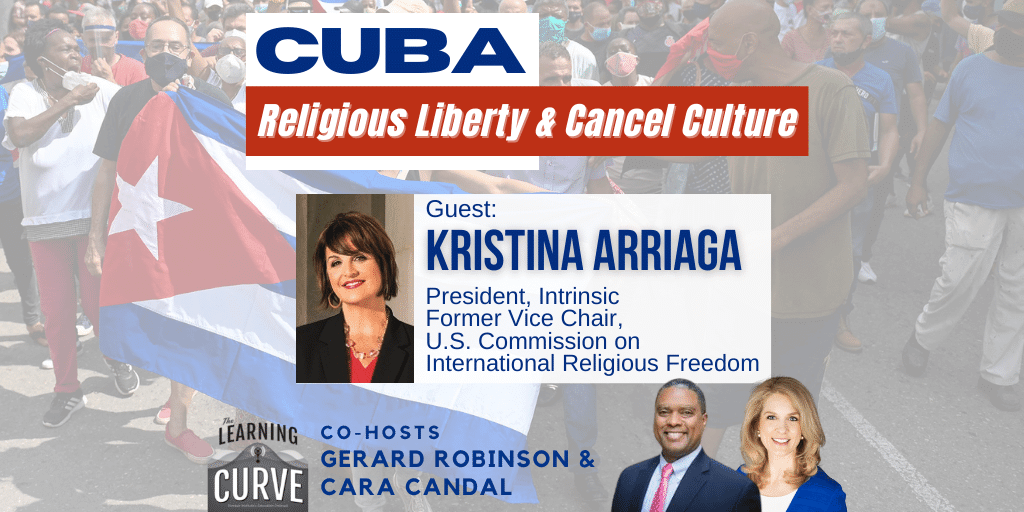 This week on “The Learning Curve,” co-hosts Cara Candal and Gerard Robinson talk with Kristina Arriaga, president of Intrinsic, a strategic communications firm, and former vice chair of the U.S. Commission on International Religious Freedom. Kristina shares her family’s experiences fleeing Castro’s communist regime in Cuba and other hardships, and how her background has shaped her commitment to religious liberty. They discuss the current political situation in Cuba, and the lessons American citizens, teachers, and students should learn about communism’s impact on human rights. She shares her work to advance religious freedom as former executive director of The Becket Fund, where she honored courageous Cuban political prisoner Armando Valladares and so many other human rights activists, and through her service on several noted international commissions. Finally, they discuss parallels Kristina highlighted in an October 2020 USA Today op-ed, between cancel culture in America and some of the features of communist Cuba, such as speech codes, political correctness, and social shaming. They delve into why cancel culture is so dangerous to the free exchange of ideas and a healthy civic life, and how parents, teachers, and professors can combat it.

Stories of the Week: The Biden administration is extending the moratorium on federal student loan payments and interest – originally scheduled to expire next month – through early 2022. But exactly who is eligible? The New York Times reports that 340,000 of the one million children who did not report for school during the pandemic were in kindergarten, with the sharpest declines in low-income neighborhoods.

Kristina Arriaga is a passionate communicator with a storied life — from orchestrating the rescue of a Cuban woman and her two children, for which she was featured in Vanity Fair and Reader’s Digest, to visiting American Pastor Andrew Brunson in prison in Turkey, attending his judicial hearings in Izmir, and advocating for his release both in Turkey and through the pages of The Wall Street Journal. She is particularly interested in free speech, freedom of religion or belief, and international human rights for girls and women, and has written extensively on all these issues. Her recent USA Today piece on cancel culture went viral and was then censored for sensitive content by Twitter. In 2016, the U.S. Congress appointed her to the U.S. Commission on International Religious Freedom, where she was elected Vice-Chair for two consecutive terms. During her 3-year tenure, she met with high-ranking government officials to advocate for human rights in Iraq, Saudi Arabia, Bahrain, Egypt, Nigeria, Turkey, and many other countries. Before the Commission, Arriaga was a member of the U.S. delegation to the UN Human Rights Commission and the executive director of The Becket Fund, a public interest law firm that defends free expression. During her tenure at the law firm, she oversaw several landmark cases before the U.S. Supreme Court. Arriaga is the recipient of the 2017 Newseum Free Expression Award. Other recipients that year were Apple CEO Tim Cook, ABC correspondent Martha Raddatz, and civil rights champion John Lewis. Arriaga is a sought-after speaker and has appeared on BBC, MSNBC, C-Span, CNN, and NPR. Her writing includes op-eds published in USA Today and The Hill, and she has lectured at numerous academic institutions. Kristina has a master’s degree from Georgetown University and is reading for her DPhil at the Oxford Law Faculty at Oxford University.