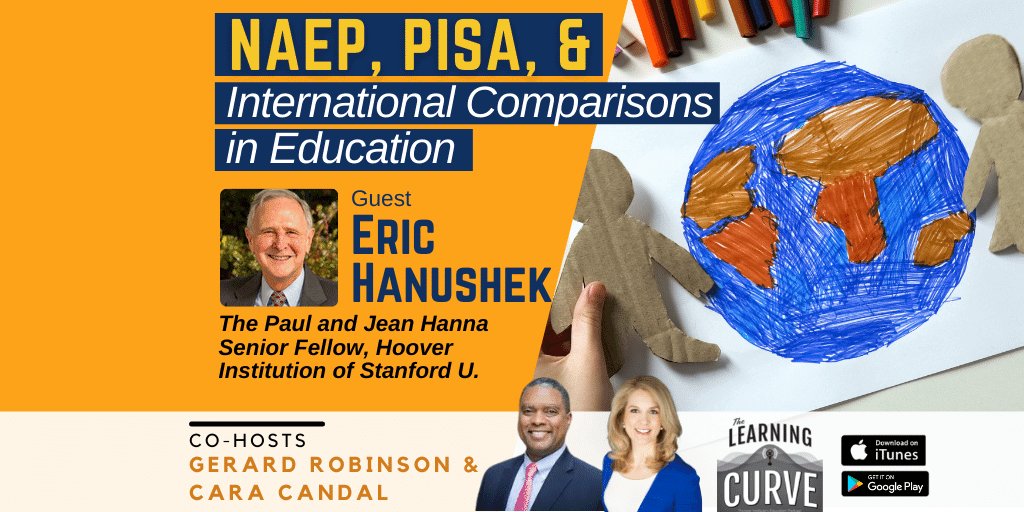 This week on “The Learning Curve,” co-hosts Cara Candal and Gerard Robinson talk with Dr. Eric Hanushek, the Paul and Jean Hanna Senior Fellow at the Hoover Institution of Stanford University. Dr. Hanushek shares how he first became interested in the economics of education, his plans for the nearly $4 million in funding from the prestigious Yidan Prize, which he received in 2021, and where he sees the greatest need for additional research in education. He shares findings from a recent Hoover Education Summit panel, focusing on educational performance among high- and low-performing countries, and how the U.S. compares on global measures. They explore why U.S. reading and math results on the National Assessment of Educational Progress (NAEP) have remained flat, despite $800 billion spent annually, and the impact of persistent achievement gaps on individual social mobility and global competitiveness. They discuss his February study on some of the ways parents influence the “intergenerational transmission of cognitive skills,” and how this impacts the lifetime outcomes of children and K-12 education policymaking.

Stories of the Week: In Tennessee, Gov. Bill Lee signed into law a sweeping change designed to standardize and streamline the funding formula for the state’s K-12 education system. National polling from NPR and Ipsos finds high rates of parent satisfaction with their children’s schooling, despite contentious K-12 culture wars.

The next episode will air on Weds., May 11th, with Cass Sunstein, the Robert Walmsley University Professor at Harvard Law School, and the author of The New York Times best-selling book, The World According to Star Wars.

Dr. Eric Hanushek is the Paul and Jean Hanna Senior Fellow at the Hoover Institution of Stanford University. He is a recognized leader in the economic analysis of education issues, and his research has had broad influence on education policy in both developed and developing countries. In 2021, Dr. Hanushek received the Yidan Prize for Education Research and he is the author of numerous widely-cited studies on the effects of class size reduction, school accountability, teacher effectiveness, and other topics. His recent book, The Knowledge Capital of Nations: Education and the Economics of Growth summarizes his research establishing the close links between countries’ long-term rates of economic growth and the skill levels of their populations. Ongoing research focuses on international variations in student performance and considers what differences in schooling systems lead to country-differences in the skills of people. He has authored or edited twenty-four books along with over 250 articles. He is a Distinguished Graduate of the United States Air Force Academy and completed his Ph.D. in economics at the Massachusetts Institute of Technology.

But money won’t start flowing to Catholic and evangelical schools without changes to other state laws. https://t.co/hh5XdZo9HG

The education culture war is raging. But for most parents, it’s background noise