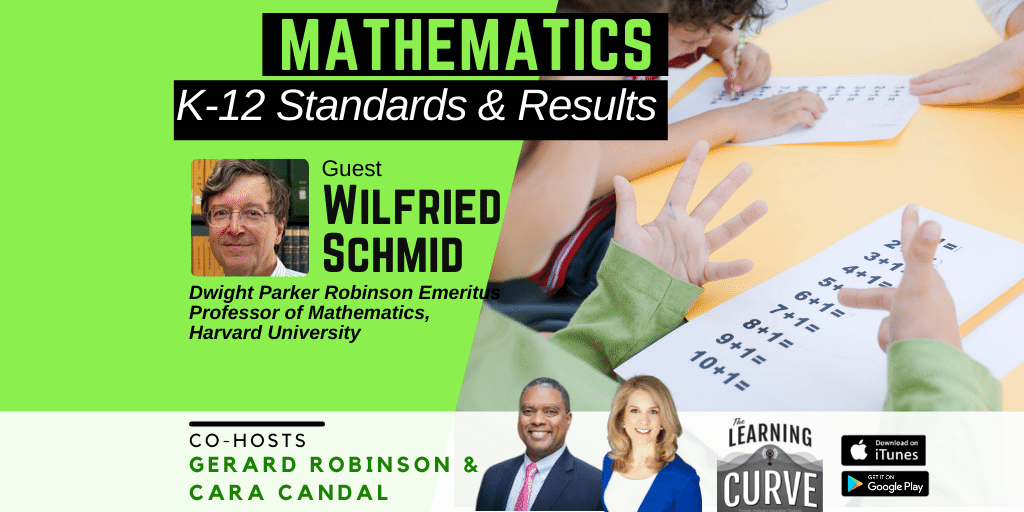 This week on “The Learning Curve,” co-hosts Cara Candal and Gerard Robinson talk with Dr. Wilfried Schmid, Dwight Parker Robinson Emeritus Professor of Mathematics at Harvard University, who played a major role in drafting the 2000 Massachusetts Mathematics Curriculum Framework and served on the U.S. National Mathematics Advisory Panel (NMAP) in 2008. Dr. Schmid shares how he became interested in mathematics, and how it was taught and encouraged in the German schools he attended. He also talks about his academic career at Harvard, his teaching experiences there and at other elite universities, and the wide disparities in the level of academic math preparation between students from America and other countries. Professor Schmid explains how he became interested in K-12 mathematics, and his work with education expert Dr. Sandra Stotsky in drafting Massachusetts’ nation-leading math standards. They discuss the “math wars” that occurred across American K-12 education, and why, even after the landmark NMAP report, this country continues to struggle with teaching students basic mathematics.

Stories of the Week: In Texas, teachers who choose to resign during the school year are being stripped of their professional certification. US News & World Report’s annual ranking of top high schools is out, and the latest list features several from Massachusetts, including Boston’s exam and charter public schools, as well as wealthy suburban districts.

Dr. Wilfried Schmid is Dwight Parker Robinson Emeritus Professor of Mathematics at Harvard University. He’s a leader in the representation theory of Lie groups and gave the first construction of the discrete series and proved Blattner’s conjecture. Professor’s Schmid’s work on Hodge theory has produced wide-ranging applications. In 1960, Schmid entered the undergraduate program at Princeton University, graduating with an A.B. in mathematics. He received his Ph.D. in mathematics in 1967 from the University of California at Berkeley. After three years as an assistant professor at Berkeley, he became professor of mathematics at Columbia University. He moved to Harvard University in 1978. In addition to his research interests, he became involved in K-12 mathematics education, after a disturbing incident in his daughter’s second grade class. Professor Schmid played a major role in the drafting of the 2000 Massachusetts Mathematics Curriculum Framework, and served on the U.S. National Mathematics Advisory Panel in 2008.

The next episode will air on Weds., May 4th, with Dr. Eric Hanushek, the Paul and Jean Hanna Senior Fellow at the Hoover Institution of Stanford University. He is internationally recognized for his economic analysis of educational issues, and he received the Yidan Prize for Education Research in 2021.

"Free speech is the bedrock of a functioning democracy, and Twitter is the digital town square where matters vital to the future of humanity are debated," said Mr. Musk. https://t.co/AMabwvVdQc

Texas Tribune: Amid a teacher shortage, some Texas educators are losing their licenses for quitting during the school year