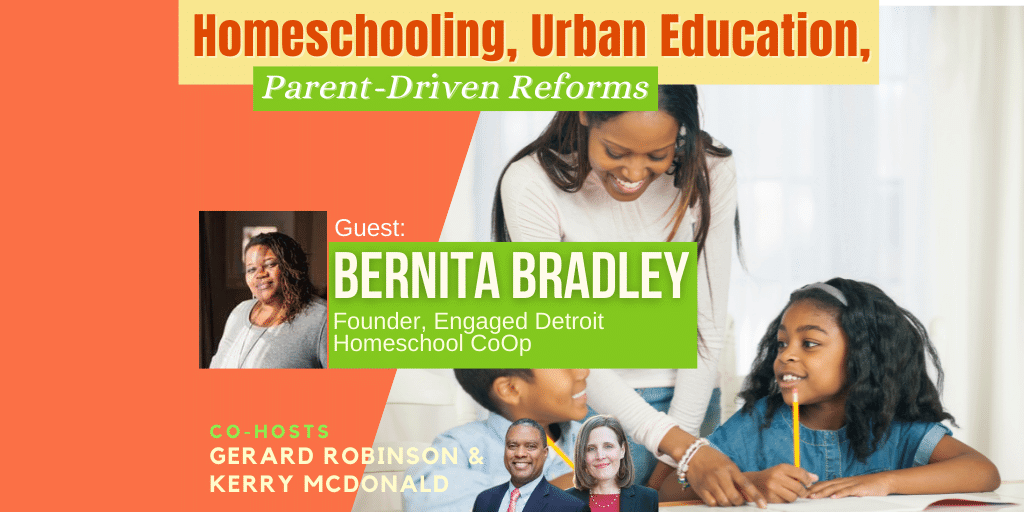 This week on “The Learning Curve,” Gerard Robinson and guest co-host Kerry McDonald talk with Bernita Bradley, founder and president of Engaged Detroit, a parent-driven urban homeschooling advocacy coalition. Bernita shares her background, and how she became a nationally recognized parent advocate for urban K-12 education reform. They delve into problems with the chronically underperforming Detroit Public Schools, the ways in which parents have responded, and the tensions in Detroit between the traditional public schools and charter schools. Bernita describes her daughter’s experience during COVID, why it was a turning point, and how it sparked an interest in homeschooling. She shares how Engaged Detroit and other parent organizations’ efforts to organize parents across the country are progressing, and the main lessons K-12 education policymakers should be learning from parent-driven school reform efforts.

Stories of the Week: A new study from a team of political scientists found that those college grads who worked for Teach for America were significantly more likely to vote than their peers who applied but weren’t admitted to the program. Former Secretary of Education Betsy DeVos has called for the abolition of the agency she once led, and giving more authority back to states and localities.

Bernita Bradley is the founder of Engaged Detroit Homeschool CoOp, and is a social entrepreneur who advocates for and with families in Detroit, Michigan. She owns and operates the Village PCL, an outreach and recruitment team that works to assure the needs of the community non-profits, philanthropic groups, and school partnerships are successful. Bernita has also been the founder, lead recruiter, and support staff for several local initiatives, such the: My Brothers Keeper Initiative 2016 & 2018, Hope Starts Here Design Strategy Process and Community Recruiter 2017, Early Works Focus Groups 2016-2017, Detroit Area Pre College of Engineering Program 2015, 2017, and 2018 Real McCoy Awards, Detroit College Access Network 2014-2017, the Detroit Promise Outreach Team 2017, the Skillman Foundation Focus Groups 2016, Brilliant Detroit 2017-2018, Excellent Schools Detroit Review Process 2013-2017, and the Goal Line Bus Loop 2018.

Next episode’s guest: Richard Epstein, the inaugural Laurence A. Tisch Professor of Law at NYU School of Law, and author of The Classical Liberal Constitution: The Uncertain Quest for Limited Government.

Yes, but not mainly because of COVID closures. Many parents also feared in-person ed.

The union problem is they have so much power in some places parents know they are powerless. And they're done.

Betsy DeVos said the Department of Education, which she used to run, ‘should not exist’