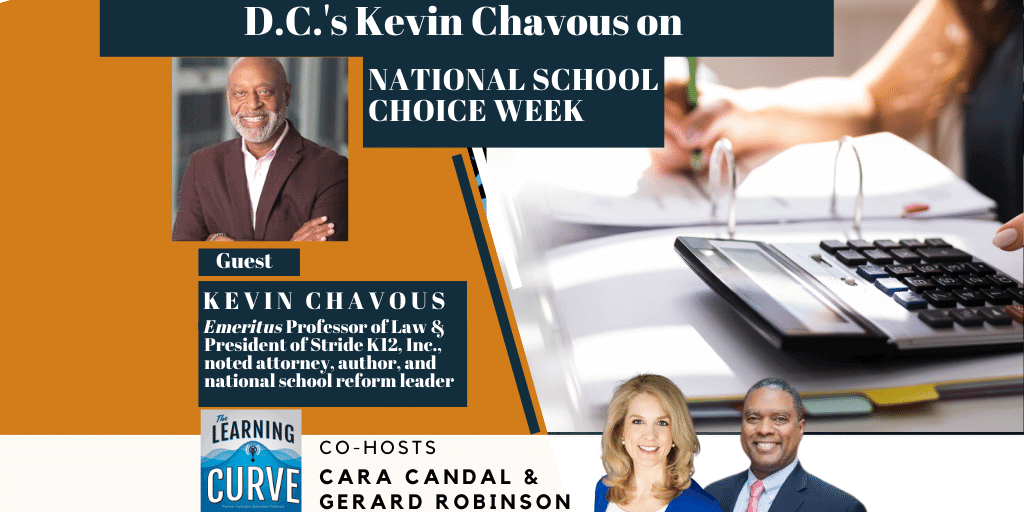 This week on The Learning Curve, Cara and Gerard talk with Kevin Chavous, president of Stride K12, Inc. and a former member of the Council of the District of Columbia, on the growing movement toward school choice in education. Chavous discusses the impact of the U.S. Supreme Court rulings in Espinoza v. Montana Department of Revenue and Carson v. Makin, as well as the expansion of private school choice programs, education savings accounts, vouchers, and education tax credits. Amid the successes, however, he also addresses some of the self-inflicted wounds that have harmed the charter public school movement in recent years, and what lessons educators should draw from the challenges schools faced during the COVID-19 pandemic. Finally, in the wake of recent nationwide declines in NAEP scores in both reading and math, he offers key suggestions for governors, state legislators, education reformers, and school choice advocates alike on a constructive future for K-12 education reform.

Stories of the Week: The state’s education community paused this week to pay tribute to former Massachusetts State Senate President Tom Birmingham, who passed away Saturday at the age of 73. Birmingham was instrumental in passage of the landmark 1993 Massachusetts Education Reform Act. In recent years, as Cara notes, Birmingham was a distinguished senior fellow in education at Pioneer Institute, working tirelessly to defend high academic standards, U.S. history and civics, school choice options, and accountability. Gerard discussed the U.S. Supreme Court case involving a 24-year-old deaf Michigan man, Miguel Perez, who says he was denied a qualified sign language interpreter for years, and later sought relief under both the Individuals with Disabilities Education Act (IDEA) and the Americans with Disabilities Act (ADA). The Court will decide whether federal law required him to exhaust administrative proceedings before seeking relief in federal court.

Kevin Chavous is the President of Stride K12, Inc. He is a noted attorney, author, and national school reform leader. From 1993 to 2005, Chavous served on the Council of the District of Columbia, where as the education committee chair, he helped to usher charter schools and parental choice into our nation’s capital. Mr. Chavous has served on the boards of Democrats for Education Reform (DFER), the Black Alliance for Educational Options (BAEO), and is a founding board member and senior advisor for the American Federation for Children (AFC). A prolific writer, Chavous has received wide praise for his book, Voices of Determination. Kevin graduated from Wabash College, where he was an NCAA District All-American in basketball and graduated from the Howard University School of Law. He tweets at @kevinpchavous.

When equity is everything that we hear, it truly baffles me that those who fight so hard for it are the same ones who are so strongly opposed to Parental Choice!

What could be more fair than supporting every Iowa student equally? pic.twitter.com/tfsrkqtbR3