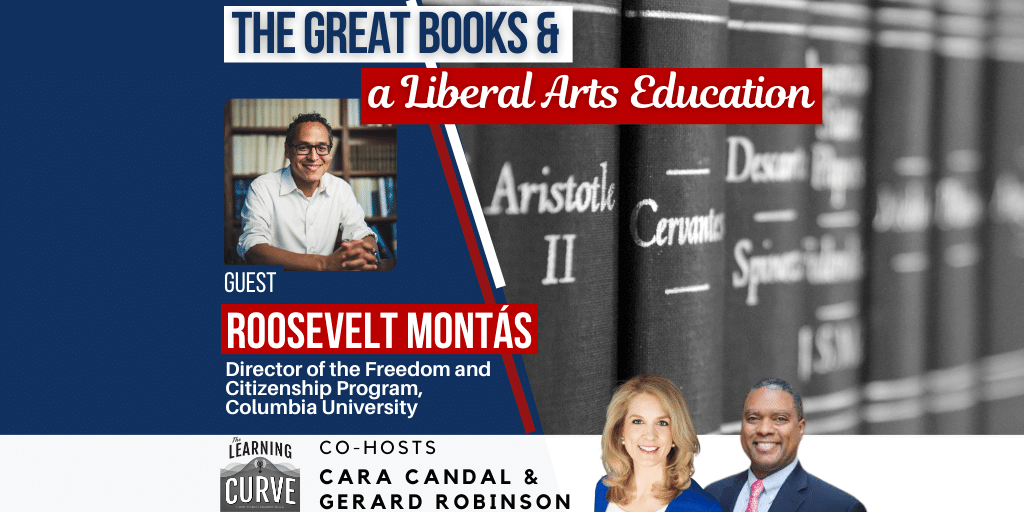 This week on “The Learning Curve,” co-hosts Cara Candal and Gerard Robinson talk with Professor Roosevelt Montás, Director of the Freedom and Citizenship Program at Columbia University, and author of the book, Rescuing Socrates: How the Great Books Changed My Life and Why They Matter for a New Generation. Professor Montás shares his background as an immigrant from the Dominican Republic who attended Columbia, and what inspired his appreciation for the Great Books tradition. He explains the deep connection between philosophy, liberal learning, and a good life, why this tradition matters for advancing liberal education, and its implications for K-12 students in a world that is increasingly centered on technical skills, and that has become overly politicized. They delve into lessons from works like Homer’s Iliad and Odyssey, about how literature and art can ennoble our young people and elevate our democratic ideals. Professor Montás concludes with a reading from his book.

Stories of the Week: Chronic absenteeism, or missing more than 10 percent of the school year, has likely increased dramatically since the pandemic, and can lead to increases in school-related stress, social isolation, and decreased motivation, all of which contribute to behavior problems. Veterans Affairs officials will now receive greater authority to adjust funding for housing, work-study programs and other education benefits for students relying on the GI Bill, after the COVID-era shift to online-only classes prompted stipend reductions and emergency legislation.

Roosevelt Montás is Director of the Freedom and Citizenship Program. He was born in the Dominican Republic and moved to New York as a teenager. He attended public schools in Queens and was admitted to Columbia College in 1991 through its Opportunity Programs. He graduated from Columbia in 1995 with a major in Comparative Literature. In 2003, he completed a Ph.D. in English, also at Columbia, where he began teaching in the faculty of the English Department in 2004. From 2008 to 2018, he served as Director of the Center for the Core Curriculum and Associate Dean of Academic Affairs at Columbia College. Roosevelt specializes in Antebellum American literature and culture, with a particular interest in American national identity. His dissertation, Rethinking America, won Columbia University’s 2004 Bancroft Award. In 2000, he received the Presidential Award for Outstanding Teaching by a Graduate Student and in 2008, he received the Dominican Republic’s National Youth Prize. He regularly teaches moral and political philosophy in the Columbia Core Curriculum as well seminars in American Studies. Roosevelt speaks widely on the history, place, and future of the humanities in the higher education and is the author of Rescuing Socrates: How the Great Books Changed My Life and Why They Matter for a New Generation.

The next episode will air on Weds., January 11th, with Andreas Schleicher, Director for Education and Skills, and Special Advisor on Education Policy to the Secretary-General at the Organisation for Economic Co-operation and Development (OECD) in Paris.

How Often Can Your Child Be Absent from School? | K-12 Schools | U.S. News

Vet’s Admin. to get new authority over education benefits for future emergencies