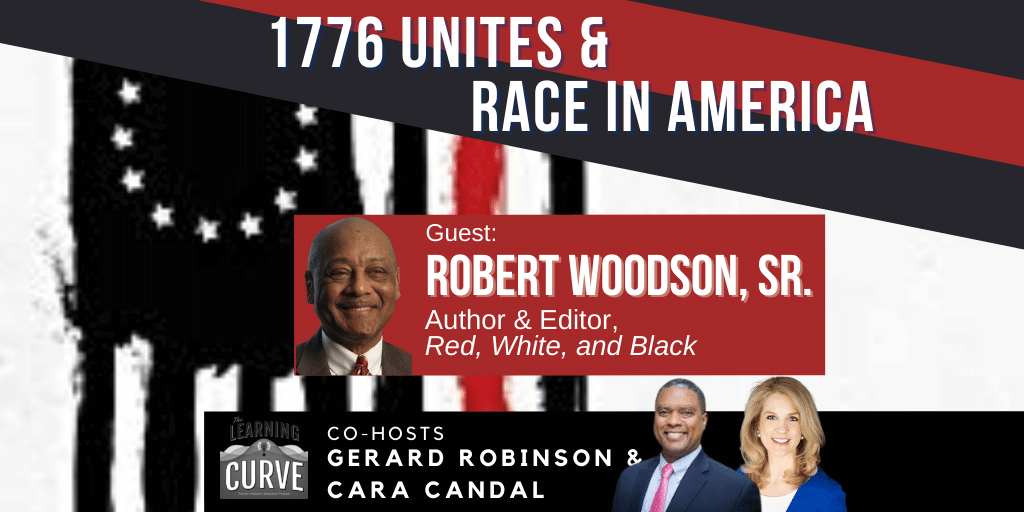 This week on “The Learning Curve,” co-hosts Cara Candal and Gerard Robinson talk with Robert Woodson, Sr., founder and president of the Woodson Center that supports neighborhood-based initiatives to revitalize low-income communities, as well as author and editor of the May 2021 book, Red, White, and Black. Woodson shares his background in civil rights advocacy, serving low-income neighborhoods fighting crime, educational inequity, and racial discord, including his involvement with the Urban League in the 1970s during Boston’s busing crisis. He offers thoughts on race relations in America after the murder of George Floyd, the call for defunding the police, and the ongoing struggles to reform the country’s larger urban school districts.

They then turn to the 1776 Unites project, which he launched to counter the 1619 Project, to take a balanced approach to K-12 American history instruction. He describes the main arguments from his new book, and reactions since its publication, as well as the challenges of being a right-leaning public intellectual, and the importance of having open discussions about race and policy that are informed by differing points of view.

Stories of the Week: We reflect on the passing this week of Bob Moses, voting rights activist, who led the 1964 Mississippi Freedom Summer Project, and later, established a math training program for students in underfunded public schools. (Watch Pioneer Institute’s 2014 event video featuring Mr. Moses.) A new Congressional spending bill will cut $40 million from the federal Charter Schools Program, and add conditions that will hurt those charters that contract with for-profit companies for services.

Robert Woodson, Sr. is the founder and president of The Woodson Center, which works to empower leaders in troubled neighborhoods to increase public safety, spur upward mobility, and inspire racial unity in America. His new book is, Red, White, and Black: Rescuing American History from Revisionists and Race Hustlers.

The next episode will air on Wednesday, August 4th, 2021 at 12 pm ET with guest, Michael Bindas, a senior attorney with the Institute for Justice (IJ). He directs IJ’s educational choice team and is lead counsel for the plaintiffs in the U.S. Supreme Court case, Carson v. Makin.

Great essay by @lindseymburke & @virginiawalden about plans to kill off the DC #SchoolChoice program. https://t.co/2wyF5dkPhh