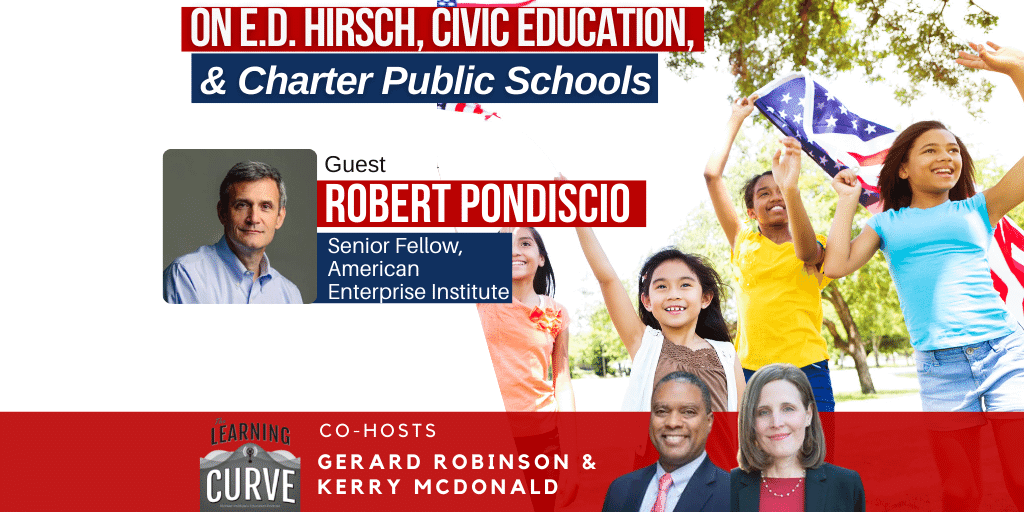 This week on “The Learning Curve,” Gerard Robinson and guest co-host Kerry McDonald talk with Robert Pondiscio, a senior fellow at the American Enterprise Institute. He shares his background working with curriculum expert E.D. Hirsch, Jr., who has emphasized the importance of academic content knowledge in K-12 education as well as civic education to develop active participants in our democracy. They discuss why civics and the study of U.S. history have fallen out of favor over the last several decades, and what that means for the health of our representative government and liberties. Pondiscio explains some of the findings of his book, How the Other Half Learns, on New York’s Success Academy charter schools network, and how the charter movement can overcome growing political obstacles, especially among Democrats. Finally, they explore his recent National Affairs essay on the need to restore trust in the institution of public schooling.

Stories of the Week: The Economist offers a thought experiment: 20 years from now, will children be taught by artificial intelligence-powered personalized learning assistants? America celebrates the 50th anniversary of Title IX, which helped bring about gender parity in sports, the many women whose lives were changed, and the impact on women in leadership roles in corporate America.

The next episode will air on Weds., June 29th, with a member of the Institute for Justice’s legal team discussing the recent U.S. Supreme Court decision in Carson v. Makin.

Robert Pondiscio is a senior fellow at the American Enterprise Institute (AEI), where he focuses on K–12 education, curriculum, teaching, school choice, and charter schooling. Before joining AEI, Mr. Pondiscio was a policy analyst and education reform expert at the Thomas B. Fordham Institute, an education policy think tank. He previously worked for the Core Knowledge Foundation and as an adviser and civics teacher at Democracy Prep Public Schools. Mr. Pondiscio became interested in education policy issues when he started teaching fifth grade at a struggling South Bronx public school in 2002. Before that, he worked in journalism for 20 years, including in senior positions at Time and BusinessWeek.

The Supreme Court STRIKES DOWN a Maine education program that provides tuition assistance for students to attend some private schools but excludes schools that provide religious instruction. SCOTUS says the exclusion of religious schools is unconstitutional.

The Economist: “The future of education – How might artificial intelligence change the role of teachers?”