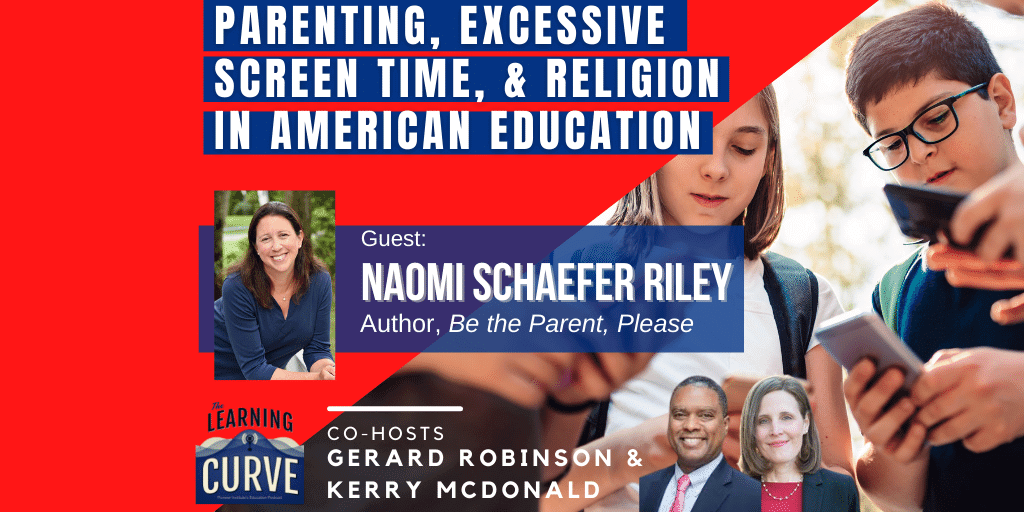 This week on “The Learning Curve,” Gerard Robinson and guest co-host Kerry McDonald talk with Naomi Schaefer Riley, a resident fellow at the American Enterprise Institute and author of several books, including Be the Parent, Please. They discuss findings from her book on how excessive technology use negatively impacts children’s intellectual, social, and moral development – which was even more of a challenge with the wide usage of remote learning during COVID-19. The conversation turns to Riley’s extensive commentary on the relationship between religion and education in American society, and lessons K-12 education policymakers should learn from higher education’s handling of faith on campus. She delves into why religion and church-state issues remain such a stark fault line across American K-12 education. They also talk about the development of anti-intellectual efforts on college campuses, and in the larger society, to use speech codes, political correctness, wokeness, and now cancel culture to shut down the free exchange of ideas, and why such campaigns to undermine the fundamentals of democracy persist.

Stories of the Week: EducationWeek reports that over 1.3 million American students did not return to school this year due to the pandemic-related closures. School districts are scrambling to lure them back, but will it work? Juneteenth, which honors the 1865 ending of slavery in this country, has officially become a U.S. federal holiday.

Naomi Schaefer Riley is a resident fellow at the American Enterprise Institute focusing on issues regarding child welfare, as well as a senior fellow at the Independent Women’s Forum. She also writes about parenting, higher education, religion, philanthropy, and culture. She is a former columnist for the New York Post and a former Wall Street Journal editor and writer, as well as the author of six books, including, Be the Parent: Stop Banning Seesaws and Start Banning Snapchat (2018). Her book, Til Faith Do Us Part: How Interfaith Marriage is Transforming America (Oxford, 2013), was named an editor’s pick by the New York Times Book Review. Ms. Riley’s writings have appeared in The Wall Street Journal, The New York Times, The Boston Globe, The LA Times, and The Washington Post, among other publications. She appears regularly on FoxNews, FoxBusiness, and CNBC. She has also appeared on Q&A with Brian Lamb, as well as the Today Show. She graduated magna cum laude from Harvard University in English and Government.

The next episode will air on Wednesday, June 30th, 2021 at 12 pm ET with guest, David Hackett Fischer, University Professor and Earl Warren Professor of History Emeritus at Brandeis University, and the author of numerous books, including Paul Revere’s Ride and the Pulitzer Prize-winning Washington’s Crossing.

Plans for an online public school for Boston have been scrapped.

Virtual school appeared to be an attractive option, particularly among Black and Latino families surveyed by the district: https://t.co/xQMO82KBp4

Is the story of the Provincetown lobster diver being swallowed by the whale just…a fish tale?

More Than 1 Million Students Didn’t Enroll During the Pandemic. Will They Come Back?