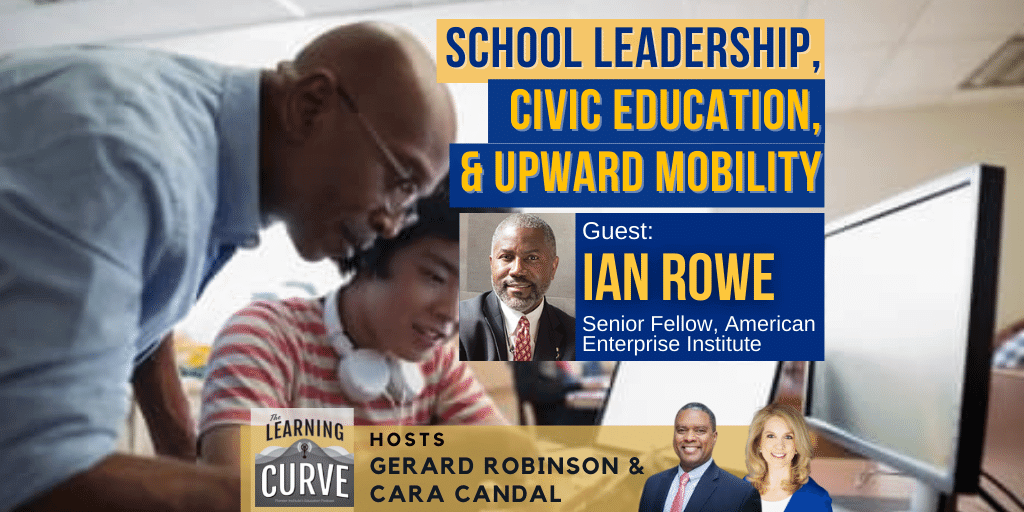 This week on “The Learning Curve,” co-hosts Gerard Robinson and Cara Candal talk with Ian Rowe, a senior fellow at the American Enterprise Institute, where he focuses on education and upward mobility, family formation, and adoption. Ian shares his background in entrepreneurial school leadership and policy research, and how he became interested in K-12 education reform. They discuss his work to advance quality school options for poor and minority kids as CEO of Public Prep and now cofounder of Vertex Partnership Academies, a character-based network of schools based on International Baccalaureate’s (IB) world-class curriculum. He weighs in on why policymaking around school choice and academic content has become politicized, and the kinds of content K-12 students should be taught, through the 1776 Unites project for example, to prepare for college coursework, meaningful citizenship, and pathways to prosperity.

Stories of the Week: Should the state take over management of the Boston Public Schools? A Boston Globe opinion writer makes the case, noting the disproportionately low-income and minority student population enrolled in the district’s chronically underachieving schools. A US News story highlights the benefits of high school internship programs, to help students get a head start on career preparation before college.

The next episode will air on Weds., January 26th, with guest, Andrew Campanella, the president of National School Choice Week.

Ian Rowe is a senior fellow at the American Enterprise Institute, where he focuses on education and upward mobility, family formation, and adoption. Mr. Rowe is also the co-founder of Vertex Partnership Academies, a new network of character-based International Baccalaureate high schools opening in the Bronx in 2022; the chairman of the board of Spence-Chapin, a nonprofit adoption services organization; and the co-founder of the National Summer School Initiative. Ian is the former CEO of Public Prep, tuition-free Pre-K and single-sex elementary and middle public charter schools, educating more than 2,000 students in New York City. He concurrently serves as a senior visiting fellow at the Woodson Center and a writer for the 1776 Unites Campaign. Mr. Rowe earned an MBA from Harvard Business School, where he was the first Black editor-in-chief of The Harbus, the Harvard Business School newspaper, and a BS in computer science engineering from Cornell University.

The $1 billion budget for the Tech Modernization Fund is a huge investment, but funds are only part of the solution. Tech Talent Project outlines tech fund best practices TMF can use to make gov work for people. #CivicTech https://t.co/KNbhyX29jw

The Rise of High School Internships