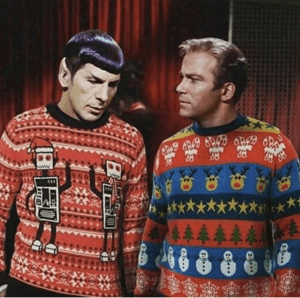 Okay, this episode, intended as a respite from all-issues-all-the-time for the holiday week, also doubles as pure James Lileks bait. Back when Ken Green and I were resident scholars at the American Enterprise Institute, lunchtime conversation often turned to science fiction, and especially our favorite hobby horse—how much we both hated “Star Trek: The Next Generation.” TOS is the only Trek worthy of honor! And William Shatner’s voyage into space this year proves that, as Ken puts it, “Shatner wins!”

But we also branch out beyond the Trek world to talk of other science fiction adaptations, including whether Dune is filmable at all, whether Fox TV might have actually done us a favor by canceling the great Firefly before Joss Whedon could screw it up with his political correctness, why Babylon 5 and Eureka are the best sci-fi shows  most people missed, why Steve thinks The Expanse will not age well, along with the two big questions: DC versus Marvel, and why do libertarians tend to be such huge sci-fi fans in the first place.

We do take a few minutes to look at some recent developments in the world of climate change (speaking of science fiction), as Ken was once an official reviewer for the IPCC on its climate science reports. Plus, you’ll also learn a quick hack for instantly identifying a TV show or movie that has been filmed in Canada. News you can use! And happy holidays.