As regular listeners will know, Lucretia and I have debated “the FDR question” a lot, amidst a flurry of new reconsiderations among a few thinkers and places on the right who think we should hold FDR in higher esteem. But over and over again in this running argument we keep coming back to Conrad Black’s magisterial biography, Franklin Delano Roosevelt: Champion of Freedom .

While there have been several serious right-leaning thinkers over the years who have offered favorable views of FDR, Black’s is the most capacious and also the most curious. And so we thought, why not go to the source himself, and hash it out with the best. To our great delight, Lord Black accepted our invitation (though insisting we call him Conrad), and hence, this episode’s wide ranging conversation, which is as much about how political life is to be understood as it as about FDR. 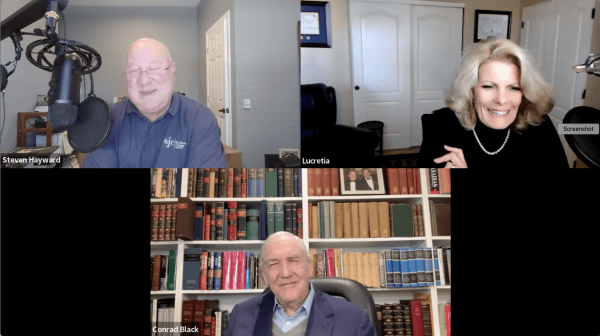 Though Lucretia is a yuuuuge Conrad Black fan (as am I), she isn’t entirely convinced by his argument, and we’re going to go mano-a-mano next week about the subject.

We also wander off into several other issues on the minds of everyone, such as whether Conrad thinks Trump should run again in 2024, and also whether he thinks American conservatives overestimate Winston Churchill.

It was a splendid conversation, worthy of the best single-malt you can lay your hands on.