Has there been a more momentous week for the Supreme Court ever? The Court went three-for-three on the key cases this week (Carson, on school choice; Bruen, on gun rights: and Dobbs, overturning Roe and Casey), not simply on the decision of the specific cases at hand, but the broader reasoning behind the decisions. Indeed this week may come some day to be be seen as the equivalent of the infamous “revolution of 1937” that saw the Court move left in response to New Deal political pressure. (And there may be more good news that partially undoes 1937 next week—stay tuned.) 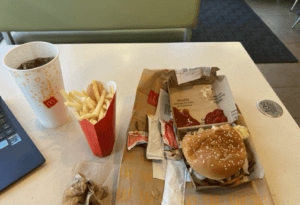 John Yoo joins Lucretia and me to break down some of the larger significance of the Bruen and Dobbs decisions, which we celebrated with pledges to splurge on really great whisky, or in John’s case, a double-quarter-pounder with cheese (as seen nearby). Now that’s living it up!

In particular, Justice Thomas’s majority opinion in Bruen and his concurrence in Dobbs hopefully point in a major new direction for originalist jurisprudence, and he manages to do this while trolling the left in the most amusing ways.

As Steve remarks at the beginning, “sometimes you just have to take the sweet with the sweet.”