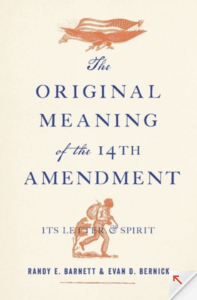 Lucretia added to her intrepid legend by venturing into the asylum at Berkeley this week to record this episode in person with Georgetown Law Professor Randy Barnett about his new book (co-authored with Evan Bernick), The Original Meaning of the Fourteenth Amendment: Its Letter and Spirit.

To remind listeners, Barnett argued the Gonzalez v. Raich case that challenged the unlimited reach of the Commerce Clause, and was one of the principal architects of NFIB v. Sebelius that challenged Obamacare back in 2012.

Before getting into the main topic of the 14th Amendment, we open with some intellectual history, as Prof. Barnett began his legal career as a prosecutor, and taught contracts in law school before being drawn into constitutional law mid-career. Since then he has published a series of highly regarded books that have helped revitalize constitutional originalism.

From there we venture into some of the history of the 14th Amendment, as well as Prof. Barnett’s thorough tour in the book of contemporary understandings—and misunderstandings—of this crucial amendment. His reconstruction of this Reconstruction Era amendment deserves to take its place as one of the pre-eminent works on this subject. (Bonus: he also supplied the trademark Ricochet sign off at the very end of the recording, so listen through the exit music for a treat.)

Oh, I almost forgot: we recorded in John Yoo’s office at Berkeley Law, and he loitered in the background, mostly heckling and pouring Maker’s Mark in our coffee. The things we put up with.