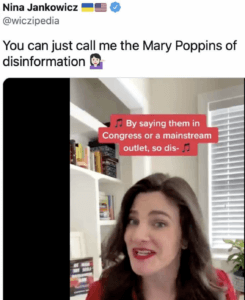 This is the week the world was introduced to the O’Brien of the 21st century, Ms. Nina Jankowicz, aka the “Mary Poppins of disinformation” (her own term), who is going to lead the Biden Administration’s new Ministry of Truth in the Department of Homeland Security—the very same government agency that leftists once despised because it might be able to spy on our library books because of the Patriot Act. Good times, good times!

This was also the week we discovered that Joe Biden can’t say “kleptocracy,” though that is admittedly a difficult word for any Democrat since it hits so close to home. It’s almost like it’s kryptonite for the left.

Reading the tea leaves, Steve sees signs of a plan coming together to oust Ron Klain from the White House after the November mid-term election, and blame him for President Biden’s poor performance.

But the bulk of this episode is a long discussion of the problem of propaganda and disinformation, with some digressions into the latest new about Ukraine, some observations on how Joe Biden resembles Jimmy Carter beyond just inflation and other retro-seventies features, and even some long overdue whisky news.

We also ask readers for their input: Should Lucretia rejoin Twitter? She still has her old fans. Let us know in the comment thread.