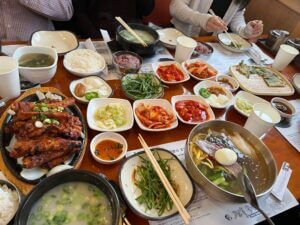 John Yoo serves as lead bartender for this gala new year’s eve edition of the Three Whisky Happy Hour, though he was nearly deposed for arriving late and then taunting us with pics of his Korean new year’s feast (see nearby). To ring out 2022 and look ahead to 2023, we cover some new whisky choices (which in John’s case included some very old port by special exemption discovered in the emanations and penumbras of the 3WHH common law), correct the mispronunciations of “Islay,” and give a tutorial of sorts on how to extract old and fragile corks from wine or brandy bottles. (Hint: don’t use a traditional corkscrew by itself. . .)

Lucretia got a head start on the whisky, and thus had her feisty-meter turned up to eleven as we reviewed the Supreme Court’s manhandling (can you say “manhandling” at Stanford?) of Title 42, and from there we finally get to the traditional new year’s eve task of nominating our picks for the most important news story or event of the year, which prompted new arguments (shocker!), and then our favorite reading over the past year. Naturally Steve brought up a book by an obscure German author (Volker Weidermann’s Dreamers: When the Writers Took Power)  which elicited the usual contempt from Lucretia, while John merely noshed another Korean pork rib.

Finally, we ended up with an argument about Hamilton, Madison, and our perspective on The Federalist. Turns out John is jonesing to crash Power Line University. Money quote from that exchange: “You know Lucretia, oleomargarine pairs perfectly with kale.” Happy new year!