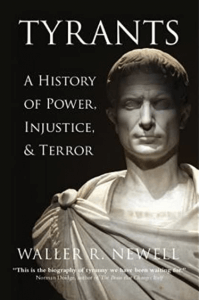 A common theme making the rounds is that Vladimir Putin must be crazy or has badly miscalculated his interests, and therefore is extremely dangerous. In fact the problem may be much worse than that. Putin is not merely a tyrant as understood by the classics (though not modern political science or theorists of international relations, who no longer recognize tyranny as a distinct political phenomenon); he has thrown in with a quasi-religious view of the purpose and destiny of a “slavic” Russia that perhaps makes Russia more dangerous than the old Soviet Union in some ways. Its hatred of America now extends beyond “oppressive capitalism” to the liberal idea itself.

These are some of the themes worked out several years ago by Waller Newell, professor of political science and philosophy at Carlton University in Canada, and author of several books on the subject, including Tyrants: A History of Power, Injustice, and Terror;  Tyranny: A New Interpretation; and the forthcoming Tyranny and Revolution: Rousseau to Heidegger. (And if you haven’t time for a book, take in his short Tablet article from a few days ago, “Vladimir Putin, Tyrant.”)