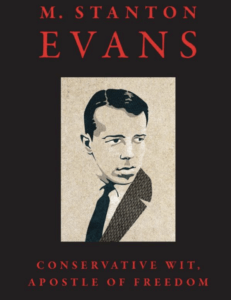 The penultimate chapter of my recent biography, M. Stanton Evans: Conservative Wit, Apostle of Freedom, summarizes the enduring literary, philosophical, and historical contributions of his last two books, The Theme Is Freedom, and Blacklisted by History: The Untold Story of Sen. Joseph McCarthy.

Digging into the audio archives of the Philadelphia Society, I found two talks Stan gave—one in 1994 that displays his theological insight, and a second around 2004 that reviews some of the untold history about Soviet penetration of American government during World War II, and its legacy for today (including how and why we no longer take internal security seriously).

In addition to some history you’ve never heard, you’ll get yet another sampler of Stan’s great dry wit, including his explanation of “why it’s bad to have Communists in your government.”

More of these to come. Stay tuned.