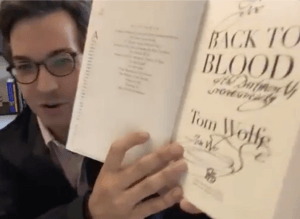 The 20th anniversary is known as the “China anniversary,” and can you still use that if your predominant mode is breaking China? In any case, the Power Line crew assembled for a live (by Zoom) VIP webcast this week that featured a rare appearance by our technical director Joe Malchow, who is usually our behind-the-screen Wizard of Oz figure.

Among other things, Joe shared a sacred relic, a signed copy of Tom Wolfe’s last novel, as it turned out Wolfe was an occasional Power Line reader. We decided after the hour was over that our general readership might enjoy the conversation (though everyone should still sign up to be a Power Line VIP member—new premium VIP content coming soon!).

A lot has changed in 20 years, from the technical aspects of websites which saw Power Line early on coping with the problem of site crashes from sudden surges of traffic (we were one of the first to figure out how to cope with that), to changes in the format and character of the online media world. We still have “blog” in our title because of the difficulties of changing domain names. The term has become archaic, but like ’57 Chevys, maybe it will come back into fashion again. We also review a number of milestones along the way—no, not that one, because we’ve told that story too many times by now, instead focusing on more recent topics, such as why Scott Johnson’s picture is on a dartboard in the employee break room at the Minneapolis Star-Tribune.

For exit music this week, it seemed like something from Tower of Power(line) would be appropriate, so you can pretty easily guess which track we’re using. And not to worry, the Three Whisky Happy Hour will be out as usual Saturday morning with two special guests, on the topic, “Just What Is ‘Conservatism’ Trying to Conserve?”