Who knew that John Yoo is a total science fiction geek?! I’m going to have to go back and scour his law review article footnotes to see if I can detect esoteric references to Sci-Fi classics, which, it turns out, he has thoroughly familiarity. 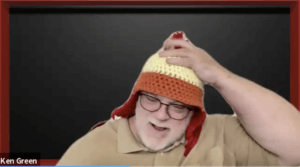 Some time last year I did a podcast on science fiction with my old AEI writing partner Ken Green (who turned up with this episode with his Jayne Cobb cap!), and John Yoo immediately filed for an injunction with the Supreme Court of Podcast Appeals, and today we performed the remedy: a podcast in which we kicked around most of the fundamental SciFi geek questions: Star Trek versus Star Wars (we were unanimous on this verdict); Star Trek: The Original Series versus all of the sequels that Ken lumps under the heading, “Woke Trek.” But wait a minute! The original series had a latest wokeness to it, though it was more sophisticated than what has come since. How to tell the difference? I argue that Captain Kirk was a true statesman, while Piccard was a UN bureaucrat.

From there we offer observations on good science fiction, though with an interesting spectrum of opinion about Firefly, the Alien franchise, Dr. Who, The Expanse, and other science fiction of note from recent decades, including some truly obscure programming, such as Blake 7.

So break out some of your best Romulan ale, and send along suggestions for how we can follow up on our proposal to do MST3K-style sequels in which we beat down on truly fictional science films like Al Gore’s “An Inconvenient Truth.” I am reserving the Tom Servo slot!