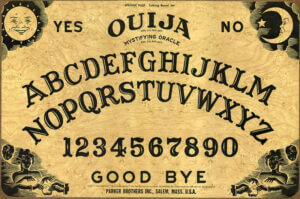 When asked in 1914 whether he would be re-elected, President Woodrow Wilson said, “The Ouija Board says ‘Yes.'”

There has been debate through the years about whether the Ouija Board is a harmless childhood diversion or a manifestation of evil.

The “talking boards” first became popular after the Civil War, used by spiritualists to contact the dead. The name “Ouija” was supposedly the name of a ghost spelled out to a practitioner of seances. The Hasbro toy company took the copyright on the name, but it’s used generically these days for such occult practices. The Ouija Board has been a much-used motif in urban legends centered on the supernatural. The Ouija Board is part of the plot of The Exorcist, Regan’s first contact with evil spiritual forces. The Ouija Board has widely been criticized and condemned by Christian churches (Catholic and Protestant.)

My wife became a US citizen 14 years ago.  She did it on her own hook, after being in the US for 25 years, not because she married me.  But now she tells me she’s beginning to regret becoming a citizen because of all the nonsense we are seeing now.

Yes, racial relations are getting worse and worse and the situation is being driven by race mongers and seditionist leftists.  Yes, the libs are threatening to tax us and take the money in our IRA’s and 401ks.  Yes, an increase in inflation is threatening to destroy our retirement savings.  Yes, inflation is increasing.  Yes, corporations will pay higher taxes, and we will pay more for goods and services as a result.  Yes, people are losing their jobs and status for speaking their minds.  Yes, we are set to waste trillions on the phantom of climate change.  Yes, crime is on the rise even as leftists are calling to abolish the police.  Yes, we have seen continuous rioting, vandalism, and violence in our cities.  Yes, anti-white racism in on display everywhere.  Yes, there is an open season on American Jews.  But not to worry, I say.   The US has seen worse.

To the beat of muffled drums 8,000 negro men, women and children marched down Fifth Avenue yesterday in a parade of “silent protest against acts of discrimination and oppression” inflicted upon them in this country, and in other parts of the world. Without a shout or a cheer they made their cause known through many banners which they carried, calling attention to “Jim Crowism,” segregation, disenfranchisement, and the riots of Waco, Memphis, and East St. Louis.—The New York Times, (A Former Newspaper) 29 July 1917 This comment is to offer a few personal observations of what appear to be century-old analogies between two progressive U.S. presidents and the congresses with which they had to deal. Reflect first on Woodrow Wilson during his eight years in office (1913-1921); look at the idealistic nature of some of his speeches, particularly after WWI […] I’ll admit to mixed emotions about the protests against Woodrow Wilson at Princeton University. I first read about the racism of the former president (of both Princeton and the United States) in junior high in a piece claiming he endorsed the film Birth of a Nation as being “History written in lightning.” Though I subsequently learned that the quote is dubious, Wilson’s favorable writings about the Ku Klux Klan were not, nor was his work to promote segregation in the federal government and in the armed services.

Seeing a man formerly considered a hero of liberals and the Democratic Party torn from a podium of honor like communist statues after the fall of the Wall has its appeal for me. But another part of me — a better part, I think — sees the foolishness of a cultural revolution to purify unpleasant history from our presence. I think a healthy perspective comes from my faith and knowledge of Scripture.