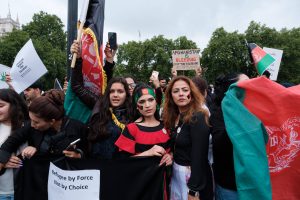 Those who have freedom must speak on behalf of those who do not. This past week saw protests in London (picture) and Washington DC (“Biden Betrayed Us” NYT one-minute video) as the administration’s withdrawal from Afghanistan has left women without protection from the Taliban. In the past, phrases such as “See, Hear, Say” and “Silence is Violence” have rightly condemned brutality against women, no matter the context. The world must hear from female leaders in the US government (Vice President Kamala Harris comes to mind, while a U.N. spokesperson has responded) who have championed women’s rights in the past but whose voices have yet to be heard over the past week.

Truth be told, it has been the American military that, for 20 years, has been the safeguard for women in Afghanistan. [See my “American Soldier” and “Afghanistan” from this past week.] The manner in which US forces have been withdrawn has left vulnerable the women and children of Afghanistan. Neither policy groups, nor conferences, nor stern warnings will stop men from making Afghani women into sexual slaves. Afghan nationals living in free countries such as England and America have spoken. But it would be good to hear from outspoken women’s rights leaders who have spoken in the past. Right now, the silence is thunderous. [Picture credit: Photo by Ehimetalor Akhere Unuabona on Unsplash.]

Ayaan speaks with Valerie Hudson about patriarchy and its expressions throughout history. They also discuss dangerous practices that hold women back, such as child marriage, polygamy, and exclusion from inheritance.

Valerie M. Hudson is a University Distinguished Professor and holds the George H.W. Bush Chair in the Department of International Affairs at the Bush School of Government and Public Service at Texas A&M University, where she directs the program on Women, Peace, and Security.

Ayaan speaks with Nicholas Kristof about human rights abuses against women and girls around the world. They discuss his recent article, “A 14-Year-Old Bride, Wed to Her Rapist, Playing on a Jungle Gym,” and dive into the subjects of child marriage, forced marriage, and female genital mutilation.

Nicholas Kristof has been a columnist for the New York Times since 2001. He graduated from Harvard, studied law at Oxford University as a Rhodes Scholar, and then studied Arabic in Cairo. He has won two Pulitzer Prizes for his coverage of Tiananmen Square and of the genocide in Darfur, along with many humanitarian awards such as the Anne Frank Award and the Dayton Literary Peace Prize.

I regularly read the journal American Affairs, which is a sophisticated populist journal that wisely strays away from sticking to any politician or political movement but is vaguely right-leaning. The journal is available in print or by online subscription. Marco Rubio has been interviewed for it. There was an article in the Winter 2020 issue called “The New Superfluous Men,” which looked at the increasingly sorry and questionable state of young men in western society. It was written by Alex Glender and there were several aspects of it that I wanted to analyze and then comment on:

As the story goes, by eroding traditional norms of monogamy and family life, social and technological developments such as feminism and the birth control pill intensified sexual competition by giving women more freedom to choose their partners without consequences.

Today I saw What Will People Say at the Scandinavian Film Festival in Sydney. It’s based on Pakistani-Norwegian director Iram Haq’s own story of being kidnapped by her family and sent back to Pakistan.

In the film, Oslo teenager Nisha sneaks her boyfriend into her room for what looks like some innocent snogging and her father busts them and gets violent. After some back and forth with social services Nisha, is basically lured out of protective custody by a phone call from her mother. Her father then drags her off to Pakistan and dumps her with his sister in Rawalpindi.

Please note that I wrote get rid of, not just get out of, the United Nations. Yes, I know we’ve talked about making this move for years, but it’s way past due to act. Let’s do a quick review of this feckless and inconsequential organization. Since many people have written so cogently on this topic, I have let them speak for me to a great extent.

To provide background, the U.N. was formed after World War II:

This past week was a bad one for Israel, and her supporters around the world, especially here in America. After another victory for Benjamin Netanyahu’s Likud party on Tuesday, the White House started floating the idea that it might change its relationship with Israel in the United Nations. In Politico, Michael Crowley wrote:

In the wake of Israeli Prime Minister Benjamin Netanyahu’s decisive reelection, the Obama administration is revisiting longtime assumptions about America’s role as a shield for Israel against international pressure.