Jack starts out the new year in appropriate Janus fashion, employing the aid of budding foreign-policy guru Jimmy Quinn to look back on the year that was in China news concering three areas (Uyghur genocide, Winter Olympics, Taiwan) and to take a guess at what this year might bring in each one.

Almost anytime I see the word “boycott,” I either cringe or turn away. In my experience, boycotts are ineffective, political statements that have little power to make a difference. They can have mixed agendas, such as the Boycott-Divest-Sanction (BDS) 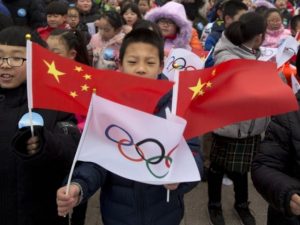 movement against Israel; or they can make an immediate statement, such as the boycott called against Goya Foods, which actually increased the company’s sales and visibility.

But the most recent boycott discussion against the 2022 Winter Olympics in China has gotten my attention. On many levels, the U.S. taking a stand against the CCP, in particular, could make an impactful statement against a regime that has made no secret about its goal to become the most powerful country in the world. I’m going to make the case for pursuing a boycott against China, because the country needs to be held to account on multiple levels.

Okay, TV ratings are down for the Winter Olympics. Apparently, Team USA’s gold medal in Diversity isn’t enough to attract viewers—or is it NBC’s coverage? No matter. This is one feel-good story from the Olympics I feel worth sharing: Preview Open

Jim Geraghty of National Review and Greg Corombos of Radio America welcome the news that North Korea and South Korea are talking and that North Korea will participate in the Winter Olympics next month in South Korea, making it far less likely Kim Jong-Un will look to cause mischief during the games.  They also shake their heads as former Maricopa County Sheriff Joe Arpaio launches a bid for U.S. Senate in Arizona, since Arpaio is now 85 years old and lost badly in his most recent campaign.  And they roll their eyes as liberals cannot stop drooling over the (unlikely) prospect of an Oprah Winfrey presidential bid, with Van Jones even calling her the most beloved carbon-based life form on earth.