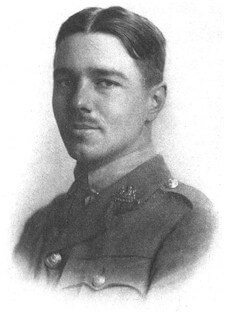 Wilfred Edward Salter Owen, beloved son, accomplished poet, and soldier of The Great War, was born 128 years ago, on March 18, 1893 in Oswestry, a Welsh border town, in the county of Shropshire.  Readers of Ellis Peters’s Brother Cadfael chronicles, or of her Welsh historical quartet (written under her real name of Edith Pargeter) will probably recognize the area.  It’s beautiful country, not far from my own home stomping grounds, rich in history and mysteries of all sorts.

Although both his parents came from families that had been, at one point, comfortably off, both sides had fallen on hard times, and there’s a sense, in some of the writings about Owen’s youth, and in his biography, that Wilfred, the oldest of four children, felt the sting of that comedown, as the family moved around Shropshire trying to better their circumstances.  In 1911, Owen applied for a scholarship position at the University of London, but although scoring well enough for entrance, he failed to hit the mark for financial assistance, and so worked for a few years as an assistant to a local vicar in order to pay for his keep and towards his studies.  He took classes in Botany, and subsequently, at the urging of one of his professors, turned his attentions to poetry and English literature.  His first attempts at poetry of his own occurred shortly after, when he took a job as a tutor in France, and wrote a small, unpublished, book of poems titled “Minor Poems–In Minor Keys–By a  Minor.” (I’ve not seen any of those poems, but many references cite it as an homage to the poetry of one of Owen’s literary heroes, John Keats.)

“The center was not holding. It was a country of bankruptcy notices and public-auction announcements and commonplace reports of casual killings and misplaced children and abandoned homes and vandals who misspelled even the four-letter words they scrawled. It was a country in which families routinely disappeared, trailing bad checks and repossession papers. Adolescents drifted from […]

William Butler Yeats isn’t my favorite poet, but he often does, as in this case, speak my heart. Politically, he doesn’t reflect my views at all. Emotionally though, I can often understand where he’s coming from. His personal life was a hot mess too, and boy howdy, I can relate to that as well. Today […]

Back in 1919, William Butler Yeats wrote a poem called “The Second Coming,” which began with the following verses:

Turning and turning in the widening gyre
The Falcon cannot hear the falconer.
Things fall apart, the center cannot hold;
Mere anarchy is loosed upon the world,
The blood-dimmed tide is loosed, and everywhere
The ceremony of innocence is drowned;
The best lack all conviction, while the worst
Are full of passionate intensity.